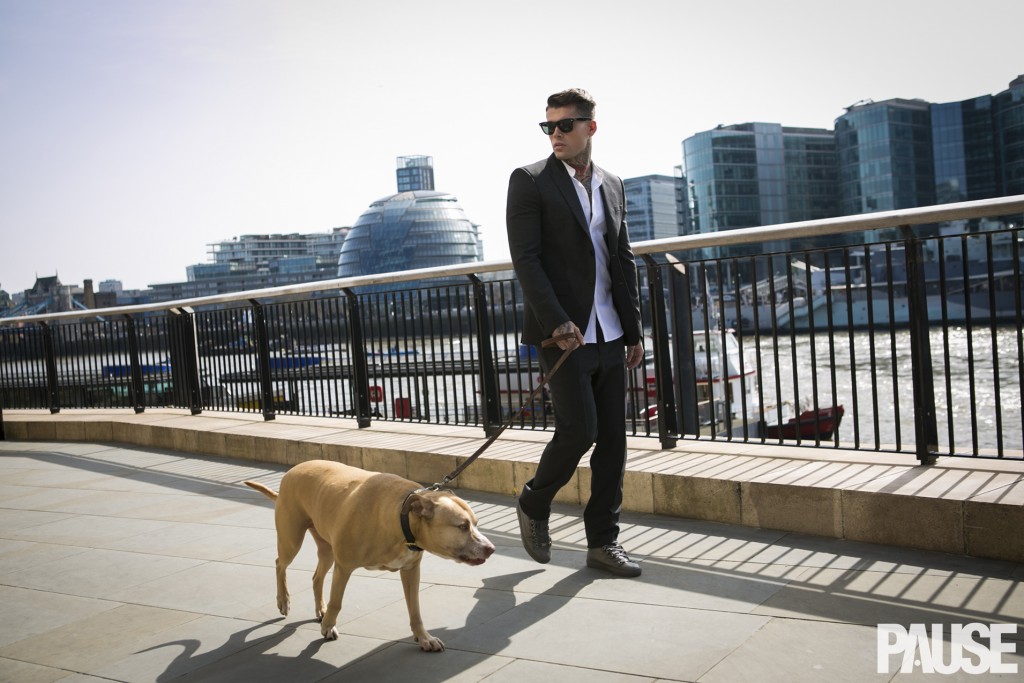 Not your typical size zero model, Stephen James is his own brand. Former professional footballer, turned full time model, Stephen now captivates millions worldwide as a popular online social media influencer. Having had to prove himself more than 10 times to get a job because of his tattoos; it’s ironically become these same iconic tattoos that have propelled Stephen to global recognition. With over 1.5 million followers on Instagram, we at PAUSE got a chance to talk about his career in modelling and where he plans to brand himself next. 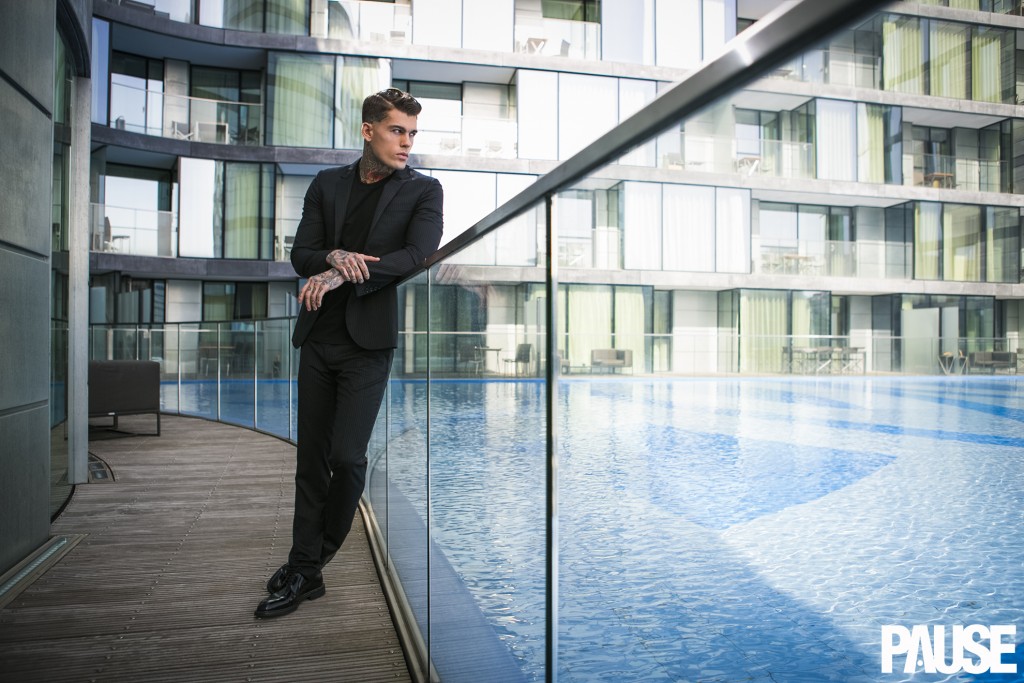 Tell us, what were you doing before you started your modelling career?

I was a professional football player in London, I was at QPR. After, I went out to Spain to continue playing football out there and that’s what I was doing up until 21.

What made you divert into modelling?

I had an injury and an operation on both sides of my groin. During my recovery I was out in Barcelona so I just went to see an agency there, from then on I decided not to go back.

So you originally got signed in Barcelona? Why not in the UK?

My mother [first] agency is in Barcelona. When I was playing football people would give me cards asking “do you want to be a model?” but because I was playing football, I had no interest. But when I was out in Barcelona I had a lot of spare time, so I thought ‘let’s try it out’. The first week I booked the campaign for Bershka – so I did that, and from then on I haven’t really looked back.

Did you have all the tattoos when you started modelling?

What fascinates you about tattoos?

I kind of use it more like art, it’s not so much the tattoos, It’s a way of expressing yourself. It’s not like I just got ‘mum’ and ‘dad’ on me, it’s more like I got self of value and a lot of things that influence me. 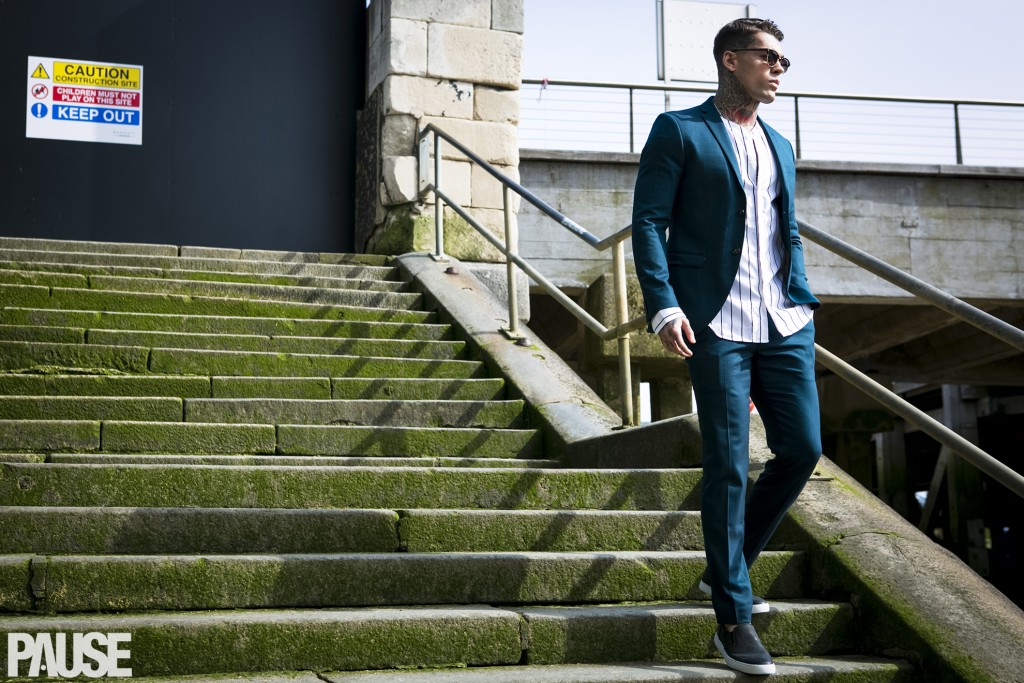 “If I upload a photo now on Instagram, maybe I’m going to book a job two/three hours later.” 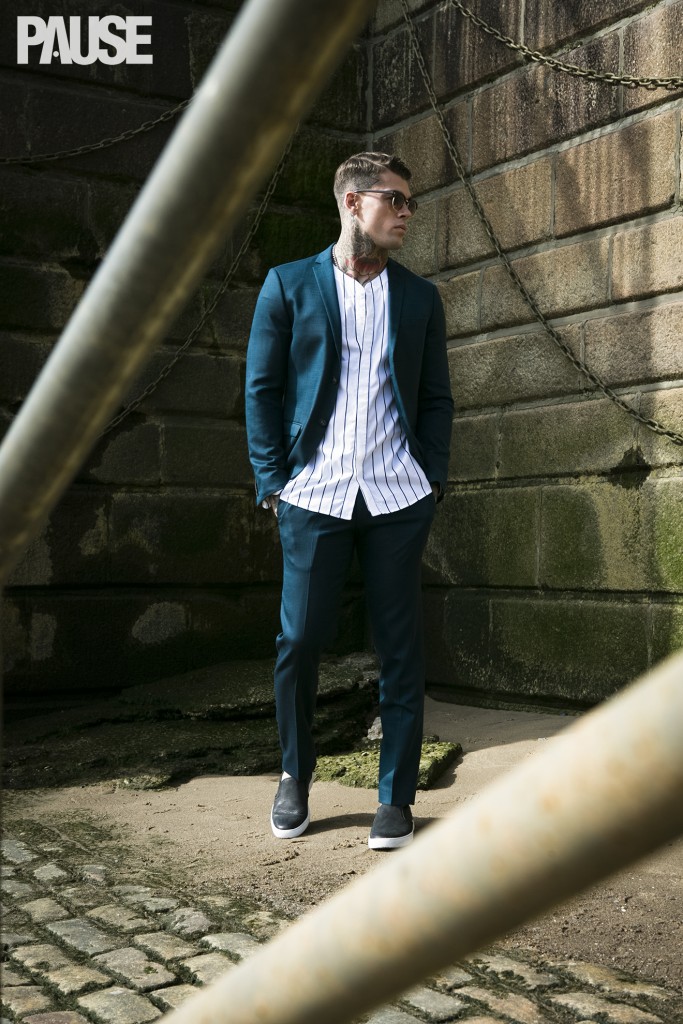 What agency are you with in London?

I don’t know why I am giving so much percentage to people and they’re doing nothing for me, they’re just taking crazy percentages from me. So I became my own publicist. If I upload a photo now on Instagram, maybe I’m going to book a job two/three hours later.

Brands are now working with influencers directly online, is this where ‘modelling’ is heading towards now? What is the difference?

Here’s an example… I would never do a campaign for HTC, but I could do adverts through my social media because they would want to work with me on that sort of thing. It’s less risk for them to put a guy with tattoos on their campaign, for me, it’s great because I work with a variety of clients. Obviously I keep all my main clients.

Right now I am working with Giuseppe Zanotti, Philipp Plein, Calvin Klein and ASOS in London. Those are my big clients that I work with on the fashion side. In terms of being out there for brands that wouldn’t use me for those sort of stuff, it’s a great way for me to earn money through my social media platforms, its different avenues.

Do you think your lifestyle has changed from being a footballer to a model?

Yeah of course, I’m more free. I can go to a club without problems. To the extent I can drink, I can do whatever I want. Right now I’m at a position where I could find a job, I’ll tell the client “I want to go to Barbados or India.” But that doesn’t happen when you first start modelling, I’m in that position now.

My friends are photographers, I could be like “I want this guy to shoot it” but that doesn’t happen, it takes a long time to get to that point. 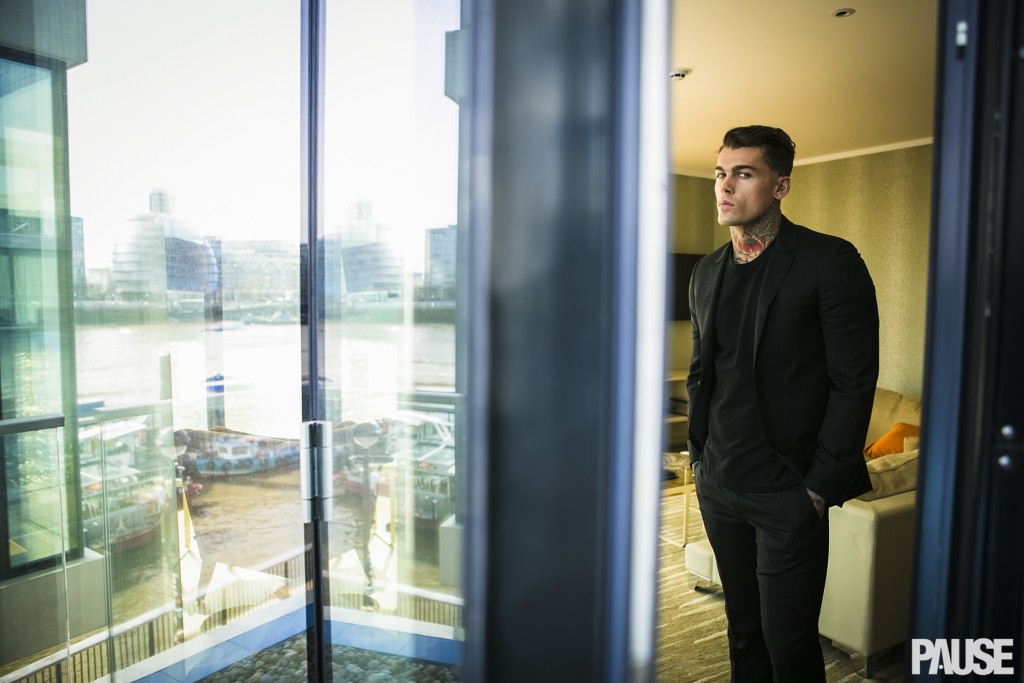 “Most models have to say “yes” to everything, mine is my choice on what I want to do.”

Are you getting to that point where you can be choosey with the jobs you want to do?

Yeah, it gets to the point where I can say yes and no. Most models have to say yes to everything, it’s my choice on what I want to do. If I didn’t want to come today, I could have told my agency I’m not coming. At first when you start modelling, before you make a name for yourself, you have to go to almost everything.

Now people want me, rather than me wanting them. You have to prove yourself, I did a lot of big campaigns to get to that position. 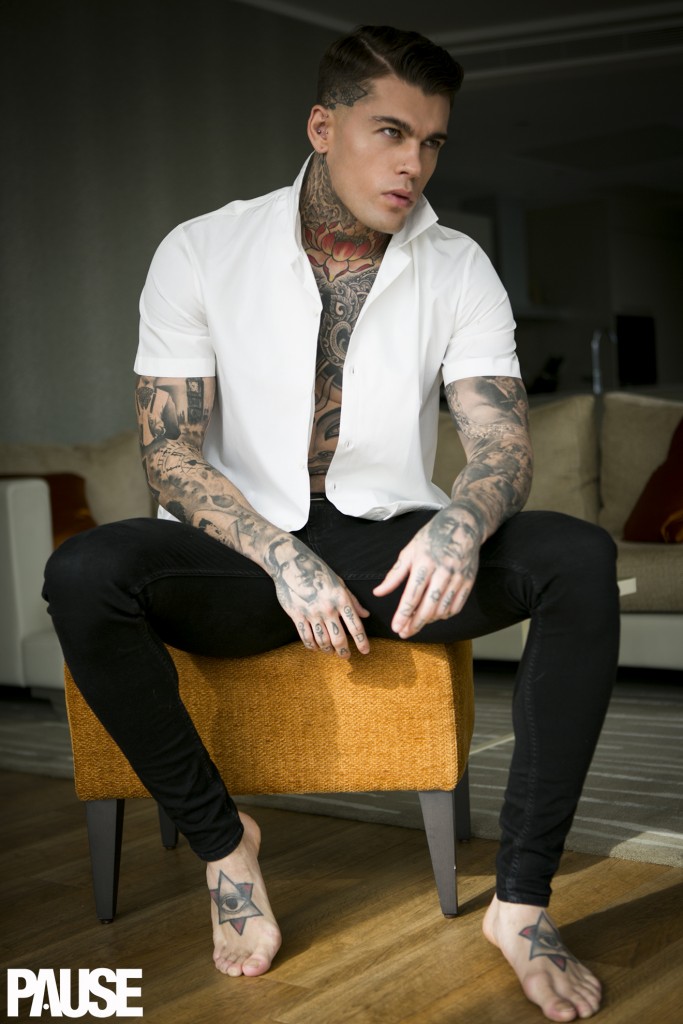 Why did you get some of the tattoos that you have?

It’s all different stories. I grew up in Barcelona a lot of years so I studied Salvador Dali. Growing up I listened to Morrissey, The Smiths and music from the 80s a lot.

What about the Indian tattoo on your stomach?

That’s Kali, I went to India and studied Hinduism. When I was playing football I got kind of religious, that’s where that comes from. 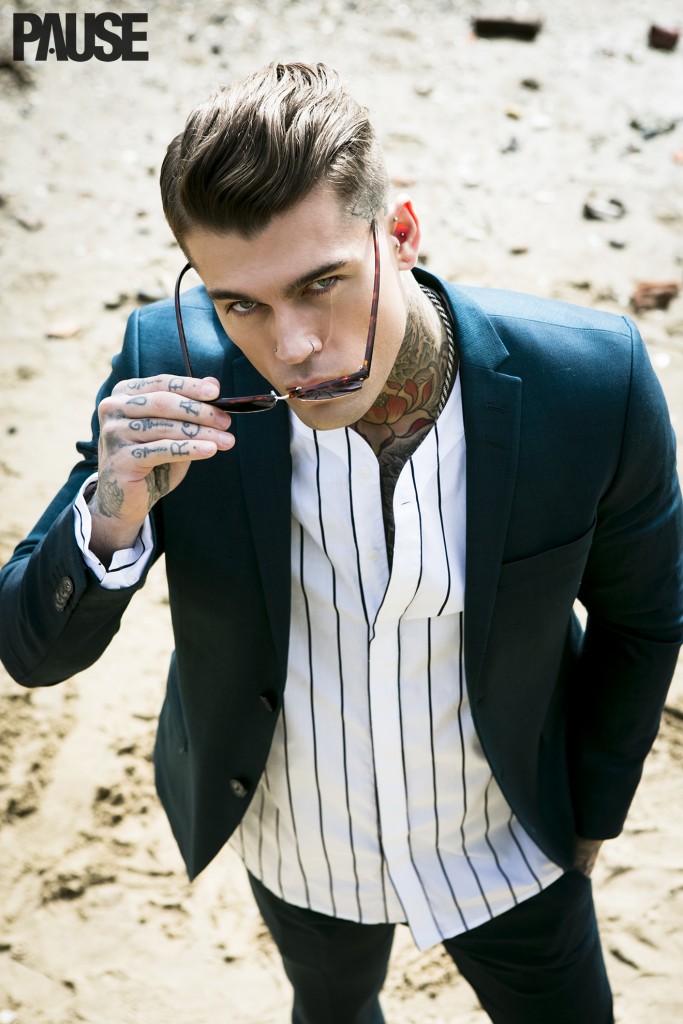 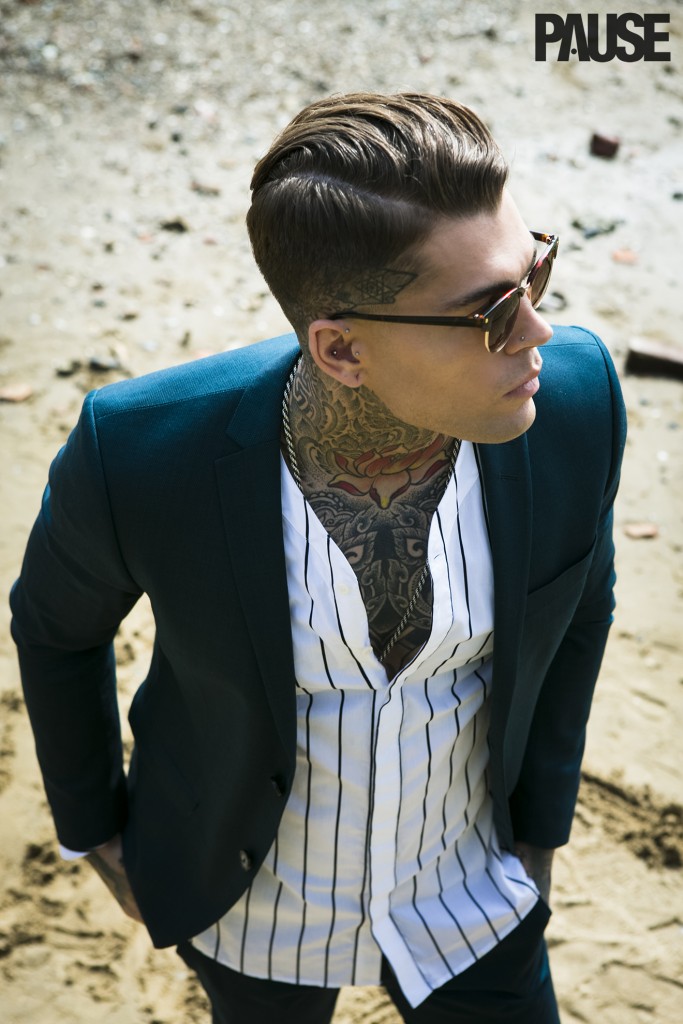 So are you religious? What do you believe in?

I don’t believe in religion, I believe in Karma. I don’t say I’m Christian or Jewish, religion segregates too many people. It’s not about that, it’s about finding the good from each one and making it your own.

Do you use tattoos to show your journey through life?

Yeah, I show all my influences down to my legs. So all the music I grew up listening to in my house, most of the things that I’ve done, pretty much did everything that had a meaning.

To be honest with you, I’m not really into that world anymore. In the last two weeks I’ve sort of drawn myself away from it because it’s become so commercial. When I started doing my tatoos 4-5 years ago, it was a different thing. Now people are just doing it for a career or to look like someone else.

I was one of the first people to make it commercial in fashion. I started to work at ASOS, ASOS is one of the biggest online stores in the world. When I first walked into ASOS, I had to prove myself 10 times more than anyone else because they’re so commercial. ASOS is all around the world and everyone shops at there, people will recognise you if you model at ASOS. For them it was a big thing, they are really careful on what models they use to sell their clothes. I’m one of their best sellers.

Do you think that it is important for models to only accept certain bookings starting out?

I think because there is so many models, people just have to accept what you can get. I was lucky I got ASOS. Some people accept a first campaign from Gucci. It all varies.

It’s hard… It depends on who and what the model is. Whether they’re their own person or just the person in the clothes. Like Gucci can get all the top 10 models in the world, no one will know who they are, they can walk down the street and people won’t know. Then you have the other type of models, more on the celebrity side, like Lucky B. Smith, who people recognise.

What has been your best modelling job so far?

Calvin Klein Fragrance, that’s been my highlight so far. 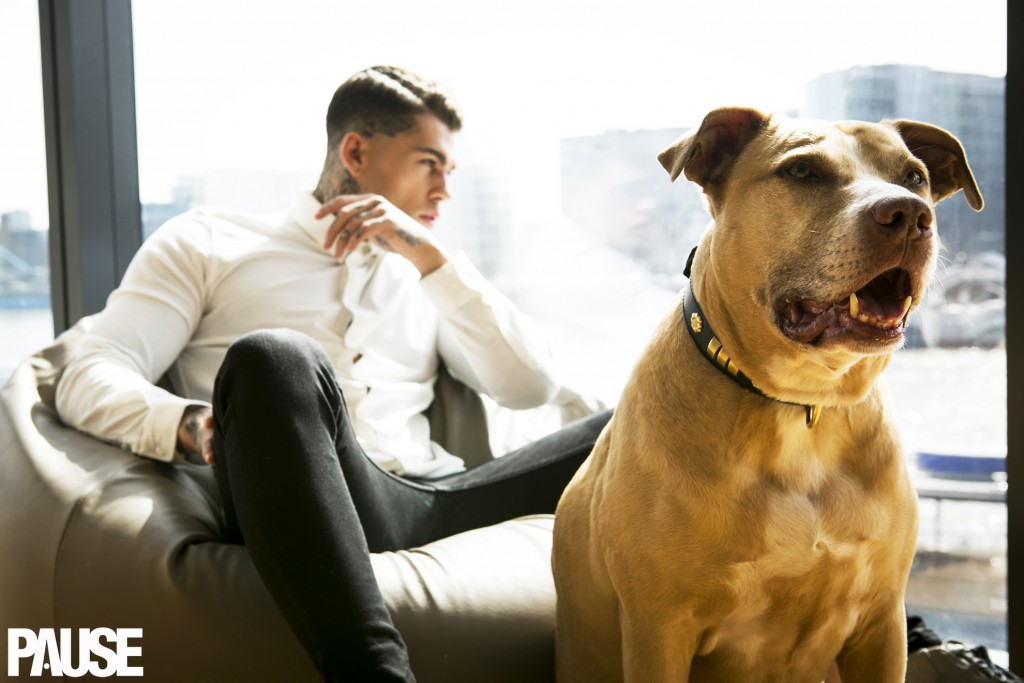 “I’m my own person; you’re not travelling with me, you’re not holding my hand while I’m doing the job.” 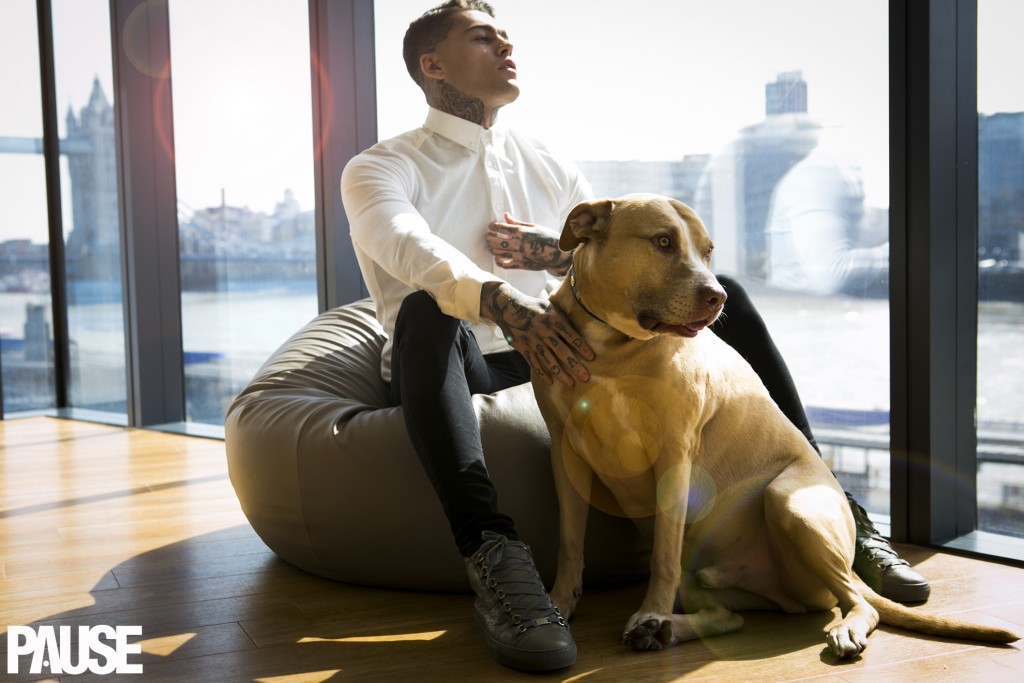 What do you hate about modelling?

Percentages. Having to give your agency so much commission, it’s a joke. What they do is they pray on young people who probably never had a job before. They get excited about a job, “Yeah I got this job, I’m getting paid 10 grand.” but yet, your agency is taking a big cut.

No one in their own mind should give that much percentage to anyone. I’m my own person; you’re not travelling with me, you’re not holding my hand while I’m doing the job. I can do all those jobs on my own. 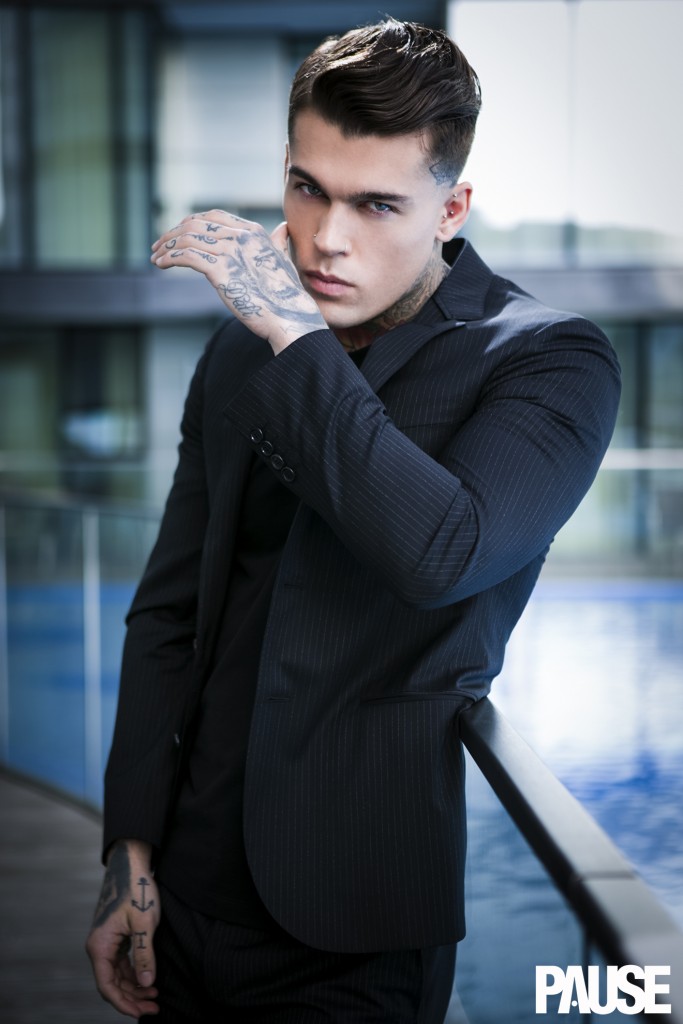 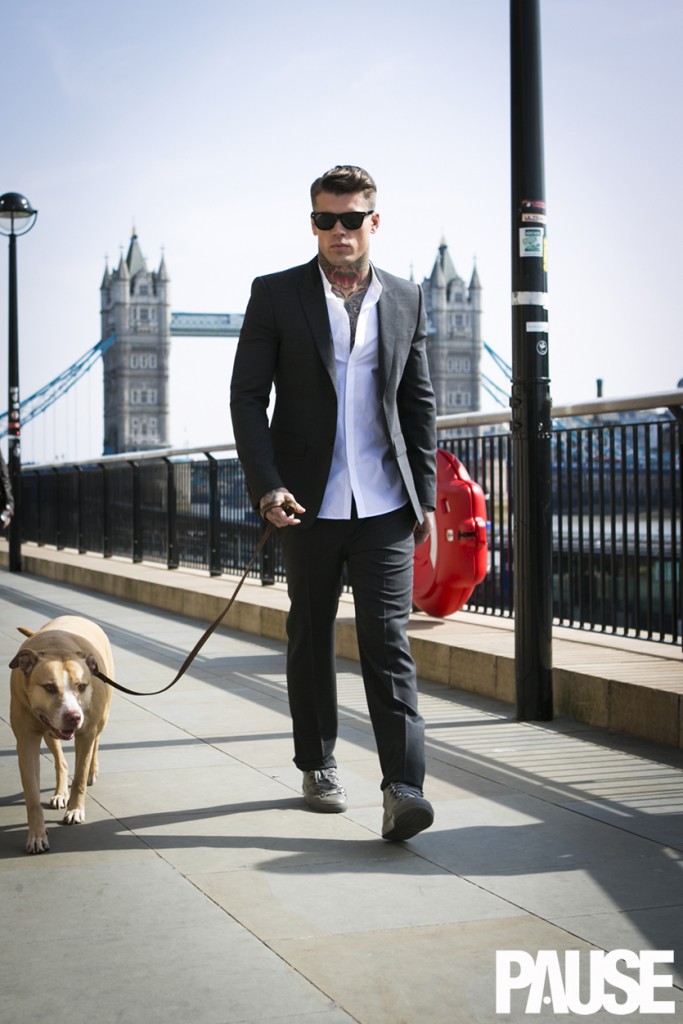 You’ve now grown your modelling career to a point where you have over 1 million followers on Instagram, how has life changed since?

Dramatically. Let’s take London for example; the clubs that I used to have issues trying to get into two or three years ago now say “Oh come down, I’ve got a table for you and your boys,” “The boys you wouldn’t let into the club 2 years ago because they had a hat on or something?” People just change.

It’s crazy because it’s same people 2/3 years ago. Everyone is your best friend now. I don’t need to bring my credit card anymore, everything is sorted out. But you know most of these people are snakes because they want something in return. They will give you a bottle, but then they want a photo.

Don’t you find that annoying sometimes? How do you handle it when people pretend to be your friend?

I just accept it, I don’t take it too seriously. I have my friends, they aren’t people that go to the clubs or nightlife people. My friends are studying to be doctors, they are the people that I would go gym with and aren’t interested in being tagged on Instagram. They are the people I grew up with when I was playing football, way before I got some fame.

Do you think it’s important to be aware that people are out there to use you when you get successful?

That’s why I cut all those people and I just made sure I got all my close friends next to me. It’s good because with all the success, they can have a little bit of that. So when I’m travelling to Barcelona I can bring two or three people with me, all my close friends who were my friends before. I could bring my photographer, manager and family. 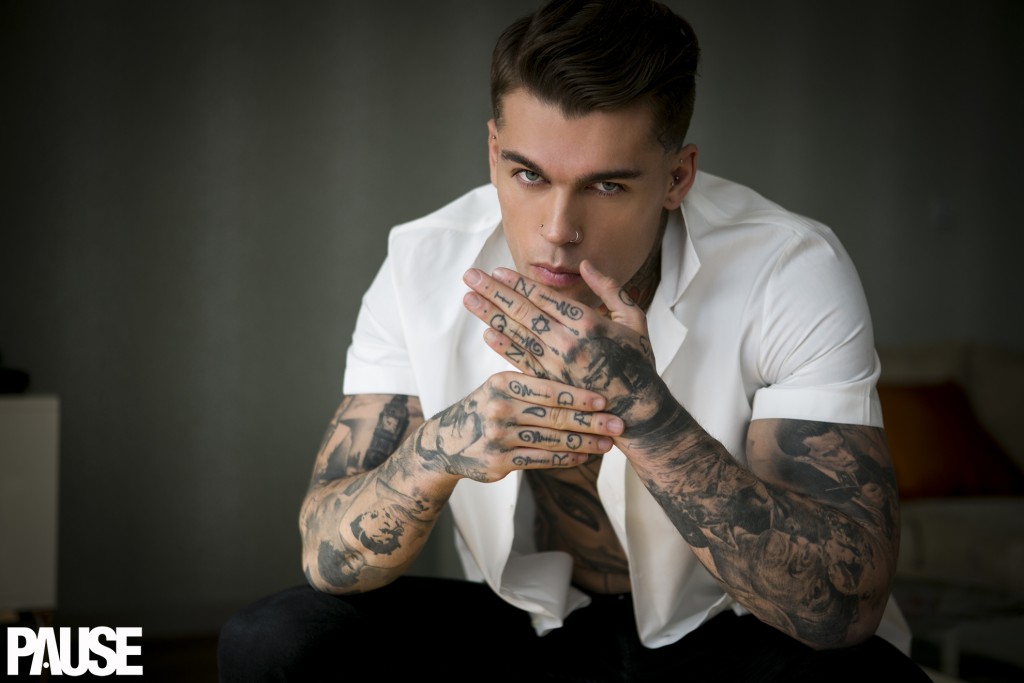 “Try not to be a tattoo model, just be a model.”

What advice would you give to another new face tattoo model?

Try not to be a tattoo model, just be a model. Don’t just do it for other people, it’s sad as you’ve got those tattoos for life. A modelling career is short and there’s only a small bunch of tattooed models that are really making money, the rest of them are making peanuts. 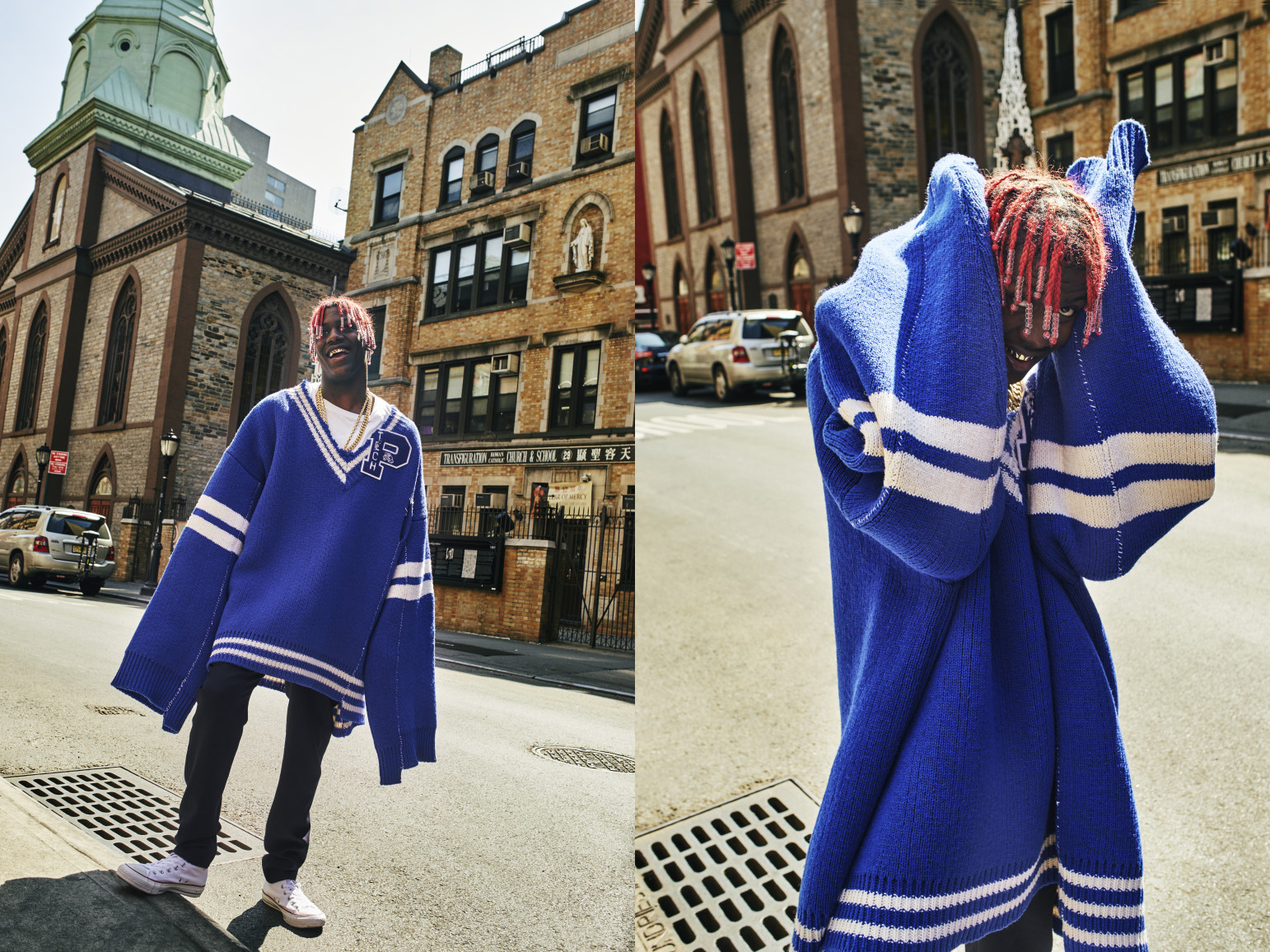