See the full Spring/Summer 2017 collections for MAN which showcased at London Collections: Men. This season Per Götesson, Feng Chen Wang and Charles Jeffrey revealed their SS17 collections. See all below:

New to the MAN initiative, Swedish designer Per Götesson is a recent graduate of London’s Royal College of Arts Menswear MA, having only presented his graduate collection last night. For his debut showcase on the LCM stage, Götesson presented us with a selection comprising mainly of the workman’s favourite material; denim.

Massively oversized billowing jeans came flowing down the catwalk in a plethora of varying washes, styles and with assorted trinkets and accessories. Being quite a tall man himself, it’s easy to see where Per pulls his oversized preferences from.

I like normal things, because they are more valid socially than wearing abstract sculptures – I just want the guy I’m dressing to feel great.

I suppose they are pretty normal… if you’re over 6 feet high.

The Beijing-born, Fengchen Wang only launched her eponymous label in 2015. Since then, she’s presented at New York Fashion Week as well as being shortlisted for the LVMH Prize 2016 – safe to say, she’s a lady that doesn’t take things easy when it comes to getting her brand moving.

For SS17′, she stuck true to her outerwear preferences by creating a collection comprised heavily of, what can best be described as, technical rainwear.

Gaiters of varying heights appeared with every other look and bungee cord was used to wrap around and cinch pieces at randomised points. Disregarding the more, ahem… conceptual pieces, there were promising, wearable elements of the collection including slogan t-shirts and wide legged trousers.

Scottish Charles Jeffrey first introduced the world to his LOVERBOY label at last January’s LCM. Now, in his second season, is it possible that Jeffrey has gotten even more theatrical?

Before his show even started, the runway was covered in a variety of beautiful, colourful flowers – not that they were about to overshadow what followed. What came next was a collection of slightly contemporary, conceptual and expectedly theatrical pieces including; chainmail, trench coats, scalloped shorts and corsetry.

As conceptual as the collection was, it’s easy to see from the exceptional fit of garments and, of course, the sheer creativity of the pieces that Charles is an incredibly talented designer. Now on his second season of the MAN initiative – shall we see him go it alone next season? We hope so! 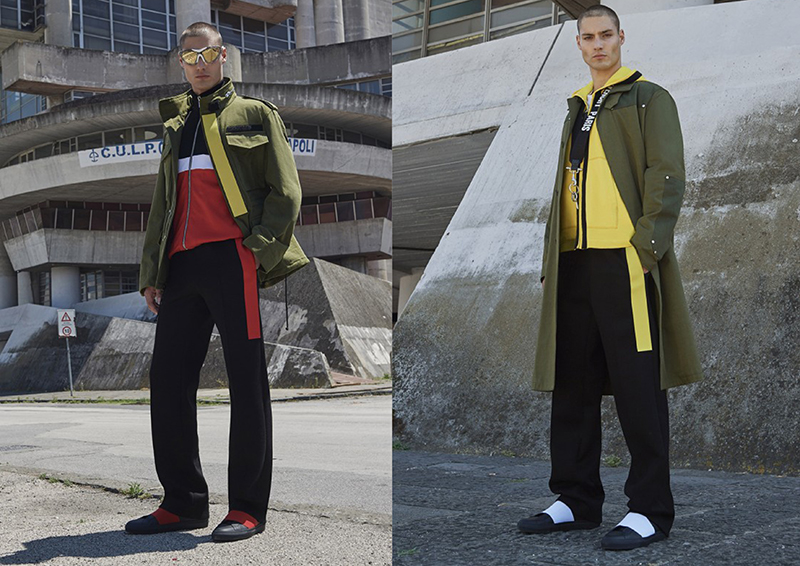