Acquiring a certain level of artistic flair to be able to interconnect the likes of rap, grime, old-school punk and indie music is one thing, but to able execute it so astonishingly is another. Though, for rising star Master Peace, it comes as second nature.

Just months since the release of his sunny debut EP ‘Love Bites’, Master Peace trades the cues for shoes as he finds himself the cover boy of PUMA x ASOS’s latest edit – the return of the iconic PUMA Suede.

Standing at the forefront of the evolution of footwear, the PUMA Suede first made its debut in 1968. More than half a century on, it remains a staple icon and the epitome of classic footwear.

Boasting an innovative, plush upper whilst preserving seasonal colourways, its distinctive excellence allows the timeless silhouette to remain a classic of today and tomorrow, made to last for all time. 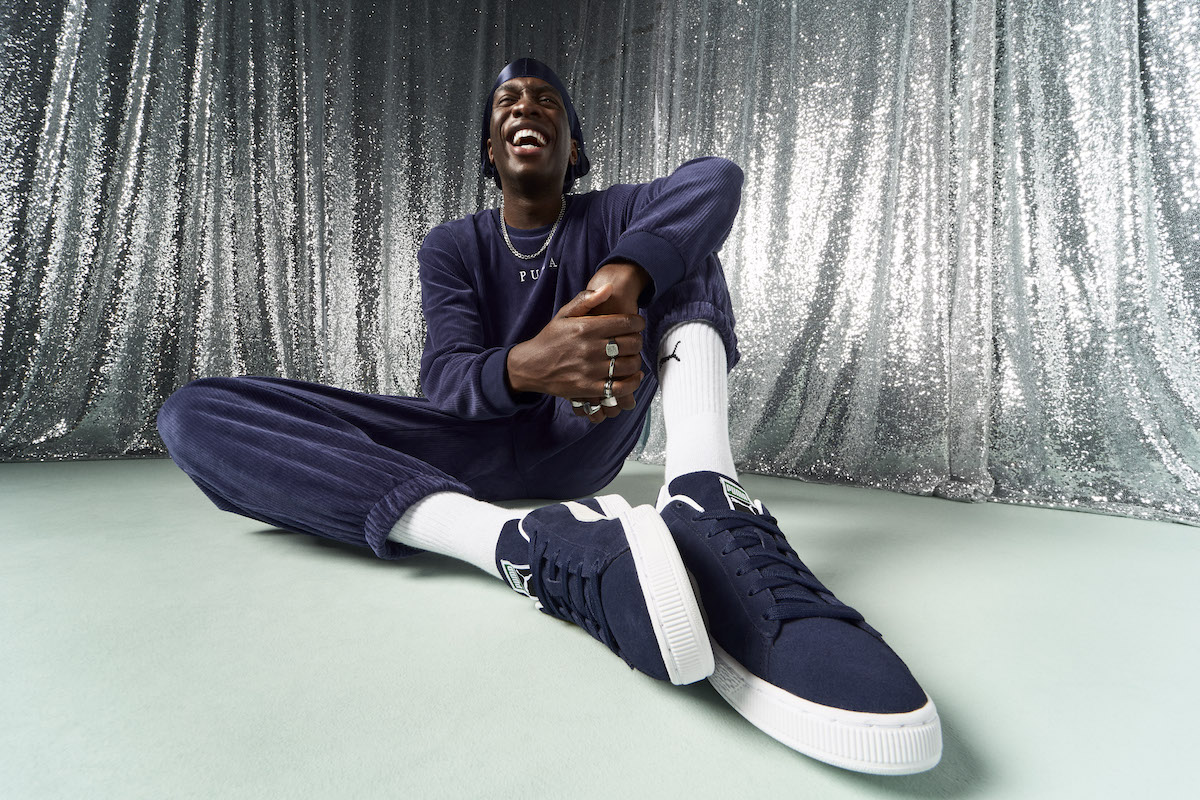 I’m fine thank you, I’m just kinda getting my next project done. So yeah, I’m pretty chilled at the moment.

We can’t begin without me commending your artist development over the years. I remember seeing you at Keep Hush sets, I can even go as far as recalling Hell in a Cell. How content are you with where you’re currently at in terms of music?

Back in the day, wow! Like that? That is old-school. Personally, I feel like I’ve found myself, I genuinely feel like I know where my future in music lies at the moment.

So, let’s talk about your debut EP ‘Love Bites’. It’s brimming with good vibes, sunshine and imposing indie-pop melodies. Talk us through the creation process.

There’s only a number of artists that have the ability to transform a listener into a whole new world through music – you being one of them. Your last few singles explore the realms of fantasy, true love and nostalgia. Did that too, stem from the relationship? 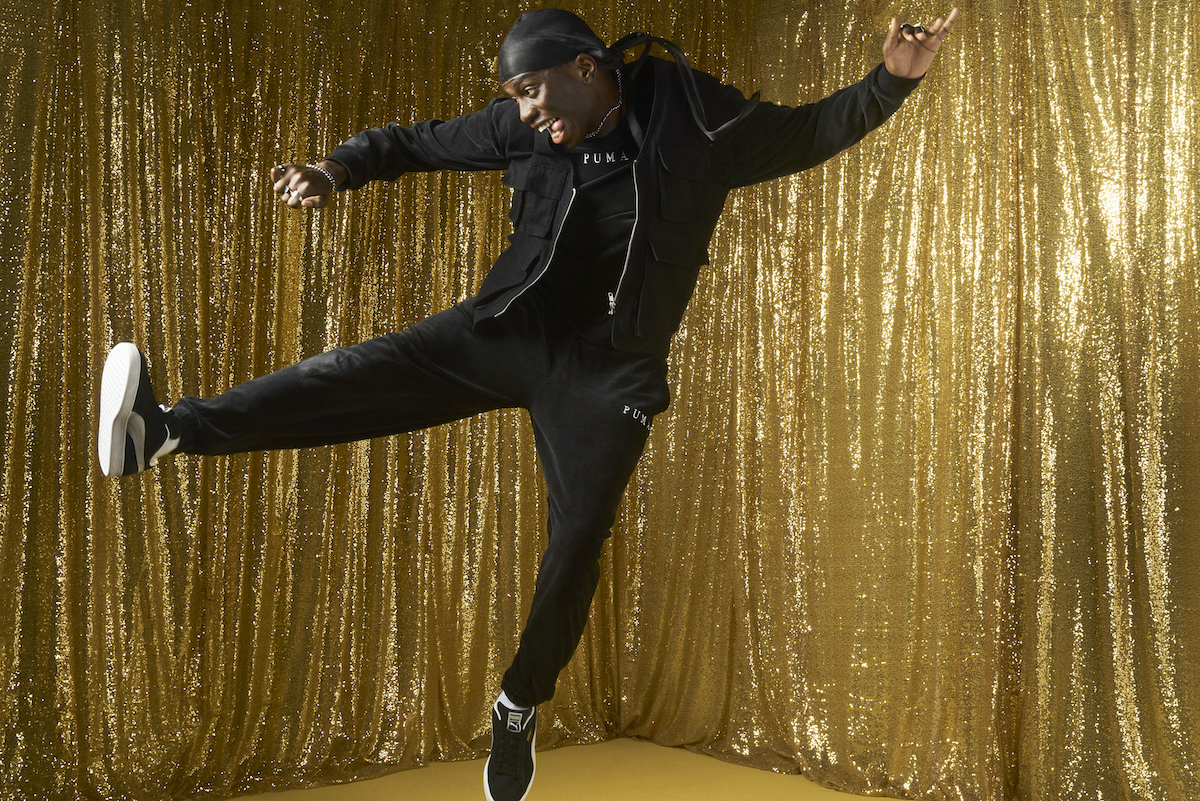 One thing I’ve realised with you, is that you’re not afraid to be yourself. That’s an important quality to obtain whilst being in this whirlwind of an industry. It seems like authenticity is something that’s important to you.

I feel like you have to be yourself and if you’re not, people see through it. I feel like I’m myself all the time, I don’t try and impress or be like anyone else except from Peace. That’s the only way I can excel.

On the subject of authenticity – comes adaptability. I don’t suppose anyone could have expected such a smooth transition of sounds when they first saw you come up on grime and rap, but you executed that so wonderfully. Exploring those genres – is that something you consider the past do you see yourself returning to all avenues of music?

I’ve found myself in a certain position in music where I can make the music I want and always have wanted to make. In my newer music, I’ve included elements of those genres.

What’s your favourite type of music to listen to when you’re not creating your own?

Ooh, I’d definitely say indie music. And old music too, like bands from back in the day. I’m definitely an old head, I like listening to old music.

I’m glad you touched on older music – only someone so deeply-rooted in music would have thought to spit hard-hitting flows over an 80’s pop culture benchmark (A-ha – Take on Me’). You did that on a Tim and Barry freestyle a couple of years ago and that’s quite the juxtaposition.

Do you know what it is? I just thought this is a beat, this is a tune that I have loved for years. It has that certain nostalgia that brings you back to a certain time in life. With that record, I was like “oh my god, I definitely need to rap on this.”

Growing up, what music were you subjected to?

I was listening to a lot of gospel music, indie music, pop music and a lot of rap as well. It was a mixture of everything. If I wanted to listen to a new rap song, I’d go to my brother, if I wanted a new indie song, I’d find it myself. I had avenues and I had people that played what I wanted to hear. That kinda helped me discover where I wanted to be. Having a lot of older influencers in my life, that’s what they were listening to at the time. 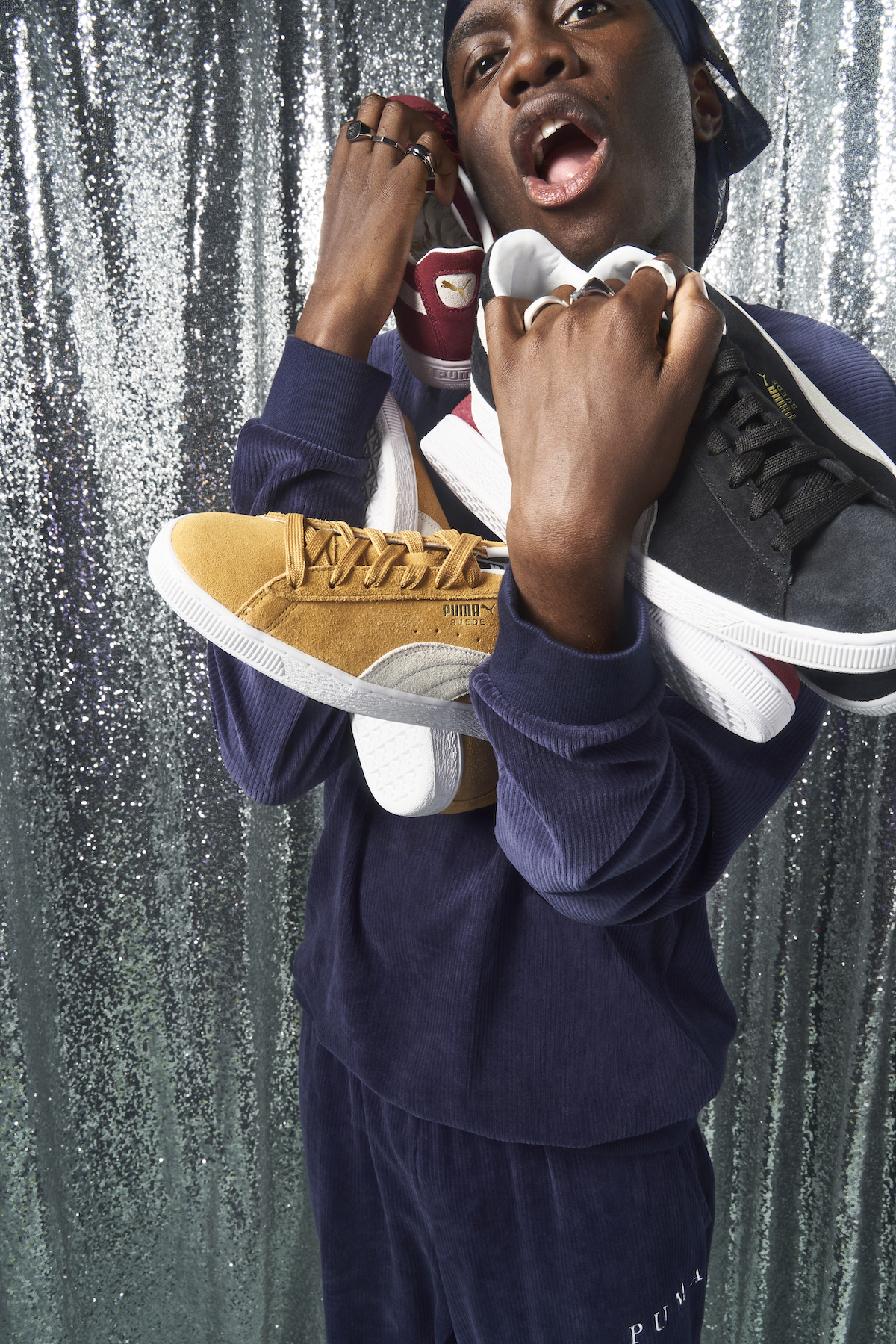 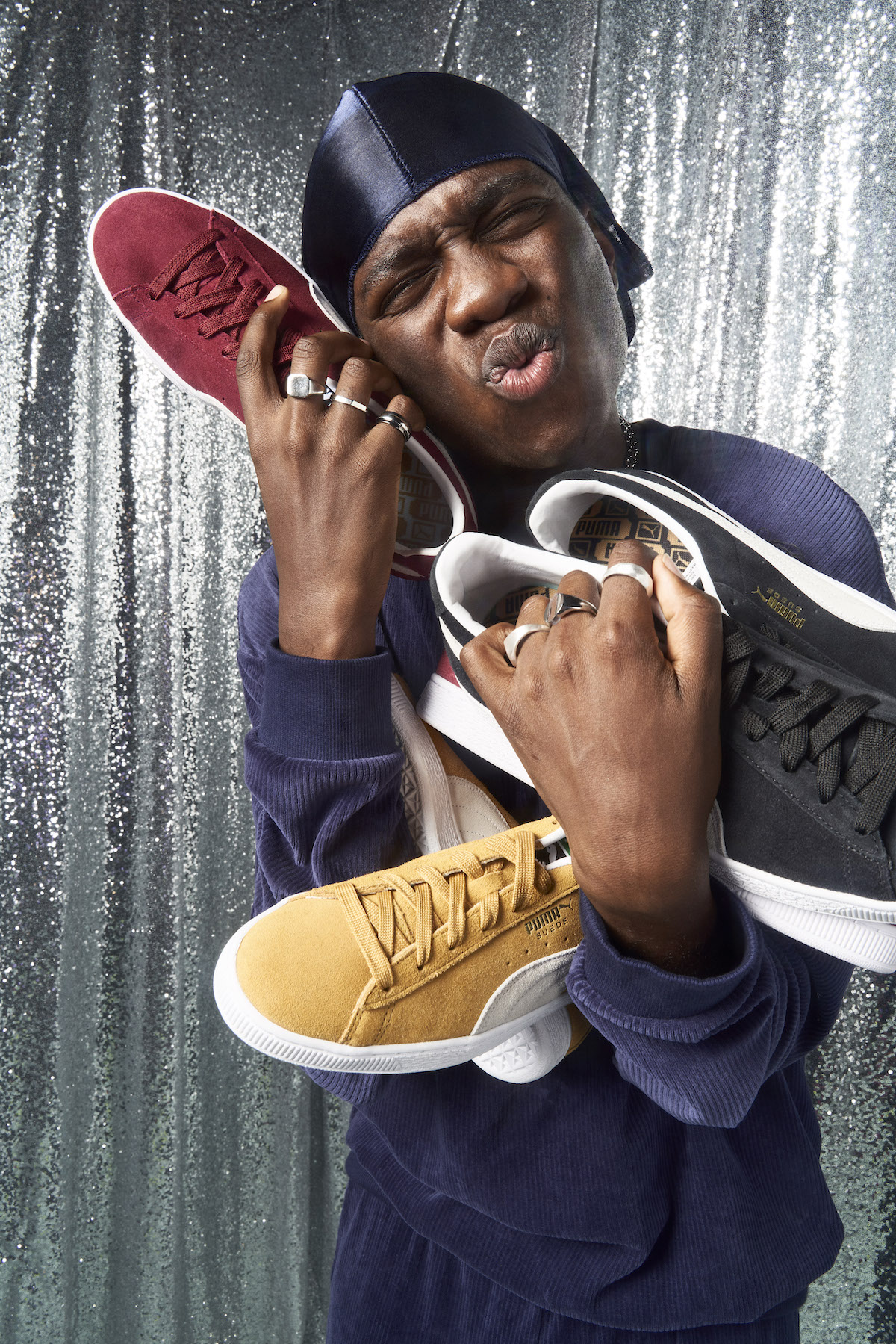 Growing up in an era where subgenres of rap were the norm and the in-thing, did you ever feel singular because you were open to listening to other sounds?  Sounds that were often regarded different because it wasn’t your JME’s and your Skepta’s?

It was hard because everyone had their own thing they were listening to and what they like. Within me, I was like: “I like this, and I want to listen to this” – and not many people understood. I did feel like an outcast for a while because I had two groups of friends; one set liked indie stuff and then I had my other group that were straight on Gangster rap. Back then, there wasn’t any drill, drill wasn’t even a thing. It was straight hood. That was the way I grew up. My brother was very hood affiliated, he used to make and listen to hood music. It was so interesting to see what people did with music.

Had these experiences shaped the way you make music and perceive music?

Ah, definitely. Personally, I make music in a certain that nobody else does. I listen to music in a mad, mad way. In the sense of a harmony, or a backing vocal or a drum pattern… something that you wouldn’t hear, I can hear them from a mile away. I know what I want every time I go into the studio and I could tell you what I could add to make a song. I go in with examples and what type of vibe I want.

Let’s talk music videos. Your recent output has been nothing short of contagiously good vibes. Do you come up with these visual concepts yourself?

No, it wasn’t actually me. It’s my creative director Sahra Zadat and my manager Felix. Sahra always had a vision of where she wants to go and where she sees me. She looks at me like from a fan perspective and where she would want to put me. Before, not saying that I didn’t feel like an artist, but now I feel like an actual artist. People now recognise my niche.

They’re quirky for sure and quite notably, so is your fashion sense. What does fashion mean to you?

I like fashion a lot. I always feel like I want my supporters to feel on the same level as me. I came from nothing, I didn’t have any hand-outs, I was really bumping train to get to the studio and getting Tesco sandwiches. The come up was bloody hard man.

I want my supporters to feel like they can be in the same situation as me and still do it. I make music for people like me, who wasn’t really liked in school, felt outcasted or didn’t have enough money to afford the latest things and latest clothes. When my managers first met me, I didn’t even have £10 to my name and I even quit my job to pursue music. I don’t take anything for granted and that’s the same when it comes to fashion. I’ll still go to a show with ripped joggers or a mad jumper that people have seen me in before, we’re all on the same level. We’re all friends, we’re all living on this one earth. I take it so seriously to not fall into the pressures of society. 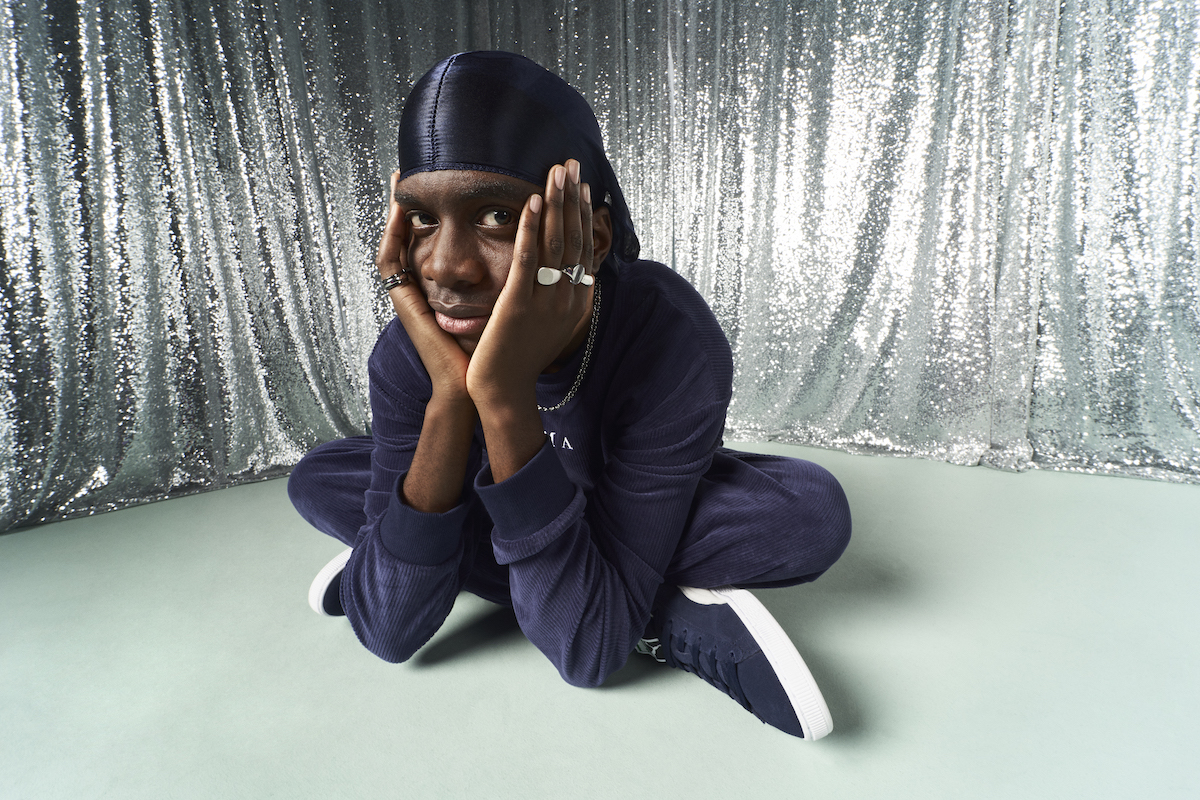 Well, although you’re incredibly humble. I’m going to have to put you on a pedal-stool for this. Congratulations on your latest PUMA x ASOS edit. Talk about suave. What was your favourite thing about this experience, except of course being the star cover boy?

Thankyou man! I do appreciate it. It was lit! I’ve never done something like that before. It was really, really good. I want to do more of this type of stuff. It was amazing! I would love to do it again.

The suede collection offers quite the colourway for this time of year, do you have a favourite?

The suedes? I love the black ones. They’re really, really nice.

You’re no stranger when it comes to sneaker culture – what’s next?

Yeah, I did. We’re out here man. I’m just trying. It’s not even down to me, it’s the people that carry on and support me, making these opportunities more visible.

Is there an article of clothing that you swear by no matter what?

Oh my, that’s so crazy you said that. My next question was on the top of your head, how many durag colourways do you own?

When I tell you, I own so many durags. It’s a bit crazy. We’re talking about 50, I did throw a lot out because I go through them like they’re going out of fashion.

God willing things go back to normal (whatever normal may be), what can we expect from you?

Shows. Shows. More shows. And I want to go on tour, definitely. My own tour. I want to see other people rocking with it in other places.

As we draw a close to 2020 and what a year it’s been, let’s launch ourselves into 2021 with optimism. What are three goals you aim to achieve? Let’s speak them into existence.

Get nominated for an award.

Get one big collaboration with another musician I am a fan of.

I want my fanbase to grow more and more.