From Port Harcourt to the world.

Over the last 15 months, Singer, Songwriter and Producer, Omah Lay, has catapulted to fame with hits like Damn, Bad Influence and Godly. The Break Out Star of 2020 went from relative obscurity to being a household name in Afrobeats almost overnight.

His reign can be seen through collaborations with icons like Justin Bieber and Olamide, winning the Next Rated Headie Award on the very first time being nominated, appearing in the Top 20 UK Afrobeats charts since its launch last year and consistently topping the Official Charts across Africa.

In the midst of recording his forthcoming album, Omah Lay welcomed Music Contributing Writer, Gracey Mae, into his home away from home. They caught up about recording in the dark and bringing Afrobeats to the light.

It’s nice meeting you Gracey, I think this is going to be one of my favourite interviews ever. For the first time, I’m doing an interview in my house.

Wow, thank you for welcoming us to your space; it’s very beautiful.

Oh, sorry. It is not my house. This is the place where I’m recording my album.

So when is it coming out? Do you know?

The album is going to come this year. I don’t have a date but I know for sure that one is coming this year. I’m still recording it. As you can see, I’m in my album mode.

I was on your Spotify earlier today, you have over a million monthly listeners. Is that not mad? That’s a city fam!

That’s mad! Afrobeats to the world. 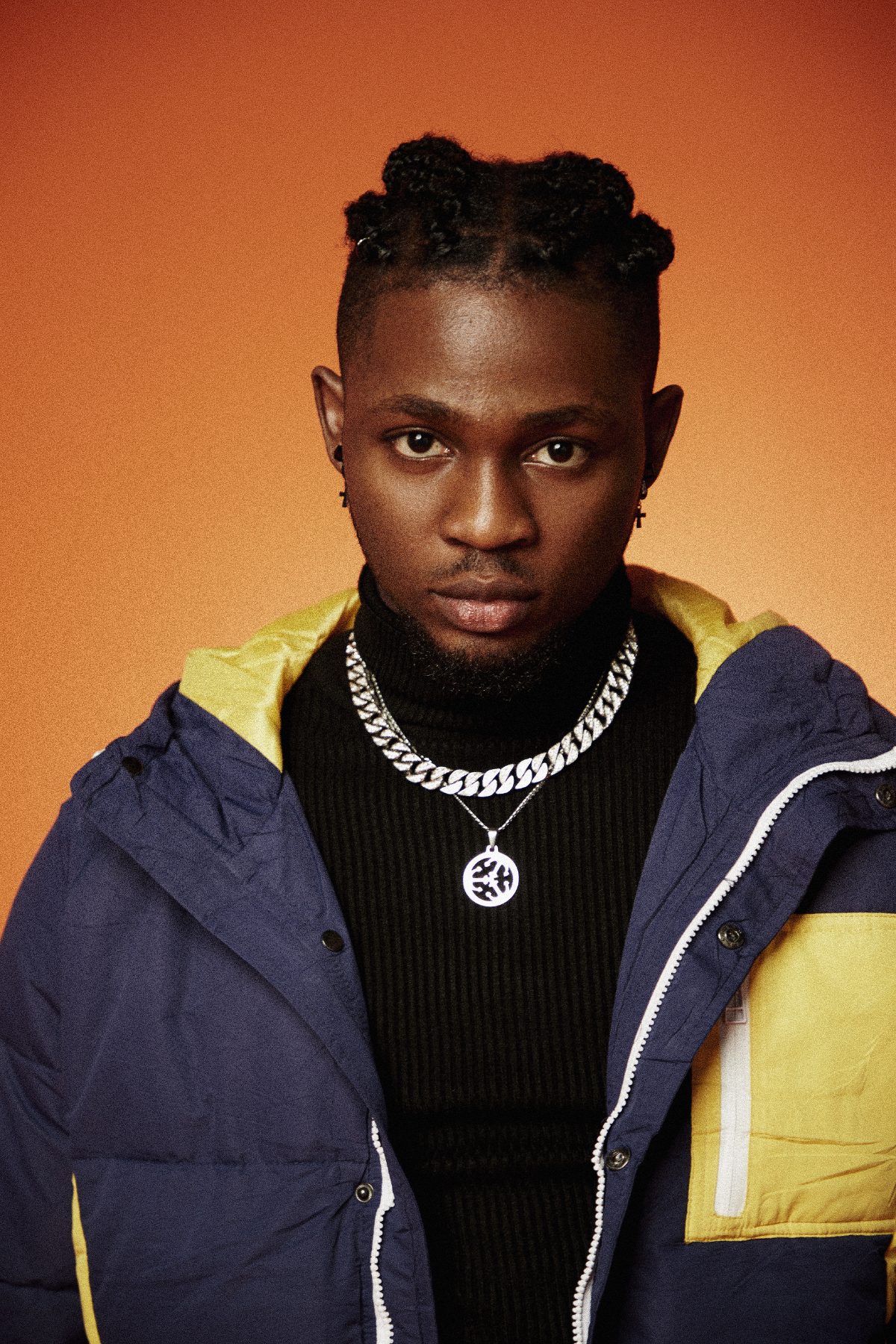 C’mon! When you see those kinds of figures. How does it make you feel?

You’ve got 32 million views on ‘Godly’. I know I’ve watched the video a million times. What was it like on set?

The Godly set was a bit stressful, I think we did the video like three times. It was one of the most stressful videos I’ve ever done. But it was fun at the end. I enjoyed the product at the end.

Tell me, did versions one and two not bang; what happened?

I don’t know what happened but I wasn’t really comfortable with the previous versions but I like this one, so you guys got to see it.

Eyy! Enjoyment. Now on the topic of enjoyment. Your birthday is in May.

How are we turning up?

I’ll still be on my album mode. I think I’ll probably still be recording. No breaks until my album is ready but we could do something that day. It depends on how it flows.

Okay, so party? Drink up? Shisha? How do you relax?

You said peace. I’m saying purple. Is that your favourite colour? You know why I’m asking right? All your EP’s have a hint of purple.

Alright, since we’re getting to know you, we’re going to go straight into a game: This or That. We’ve changed it up a little and some of these options are from lyrics of your songs. Let’s see what you choose! Up first: Groundnut or cucumber. Which one is your favourite?

What song is that from?

Do you know what song that’s from?

Water? Hmmm. Water and blood? Me? Have I ever said that kind of a thing in my song? Are you accusing me… oh that’s Damn!

Lo Lo! What’s your favourite drink in the club – Ciroc or Hennessy?

Obviously! What song was that from?

Wow, there’s a few. Are these people sponsoring you? 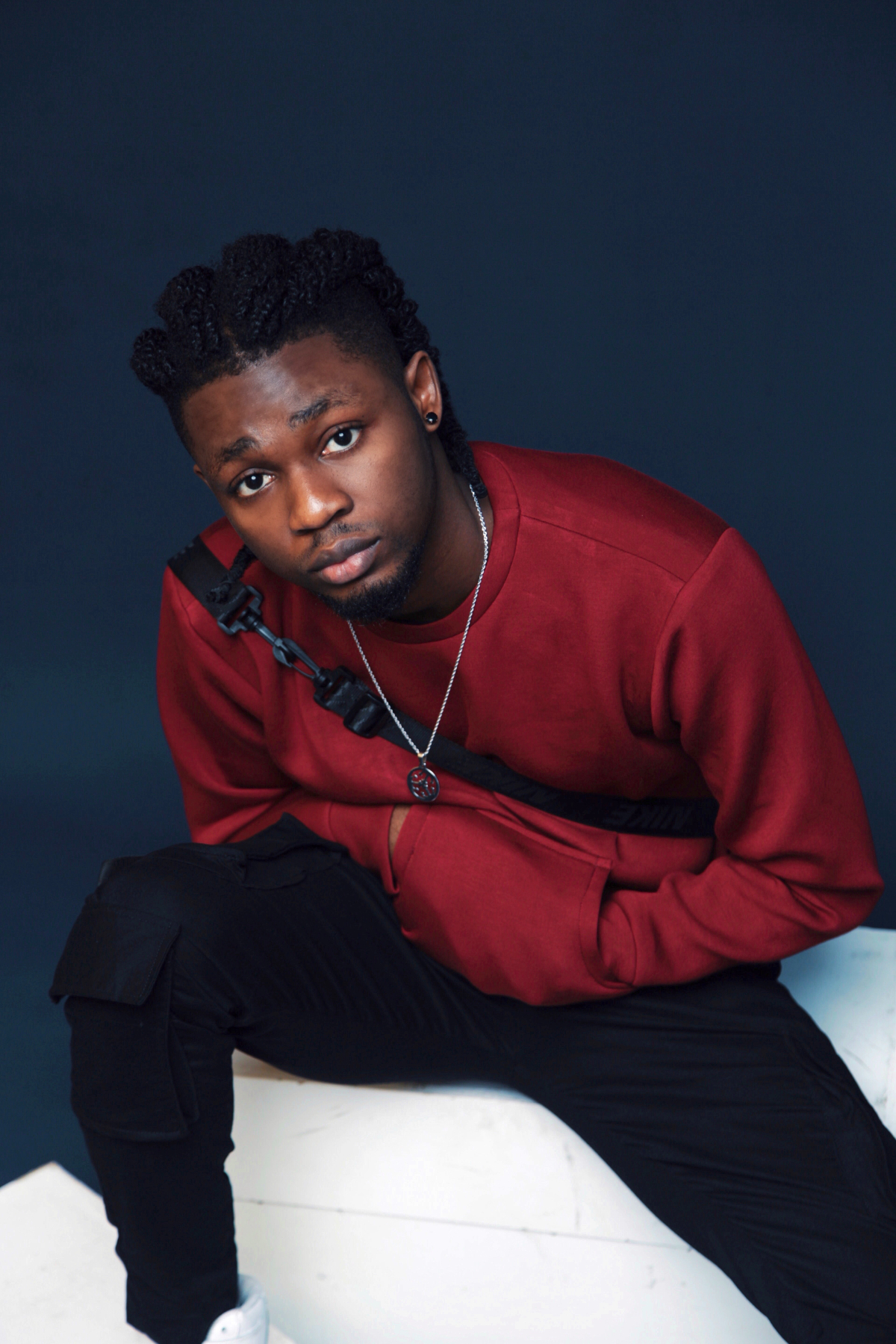 Let’s pop some bottles of Henny after this! I know you’re a linguist but what was your favourite subject in school, Maths or English?

English definitely. All that plenty calculating thing – man, it’s not for me bro! It’s not for me, believe me. Mathematics in my head like…English man, English!

In Confessions, do you say Mathematics or English?

Oh yeah! Because I’ve never been good at Math’s, so it was hard for me. I was saying that, “This Mathematics thing, it’s not my thing”. So that was it!

The last one is, home or a hotel?

I wish you said, “Home or out?” but you said hotel. It depends actually. Recently, home is a no for me but I have to just choose one right? Home!

In Hello Brother do you say home or hotel?

“Hotel, not the motel or the Holiday Inn”. Let’s talk about the project! It’s over a year since you dropped your debut EP, Get Layd.

Mad bro. You know it’s only feeling like it’s been 30 days or something but it’s already a year. Wow!

Is it true that the original title for the EP was “Child’s Play”?

Oh yeah! It was an EP I was recording back when I was in Port Harcourt before I came to Lagos. When I came here, a lot of things changed including the title. 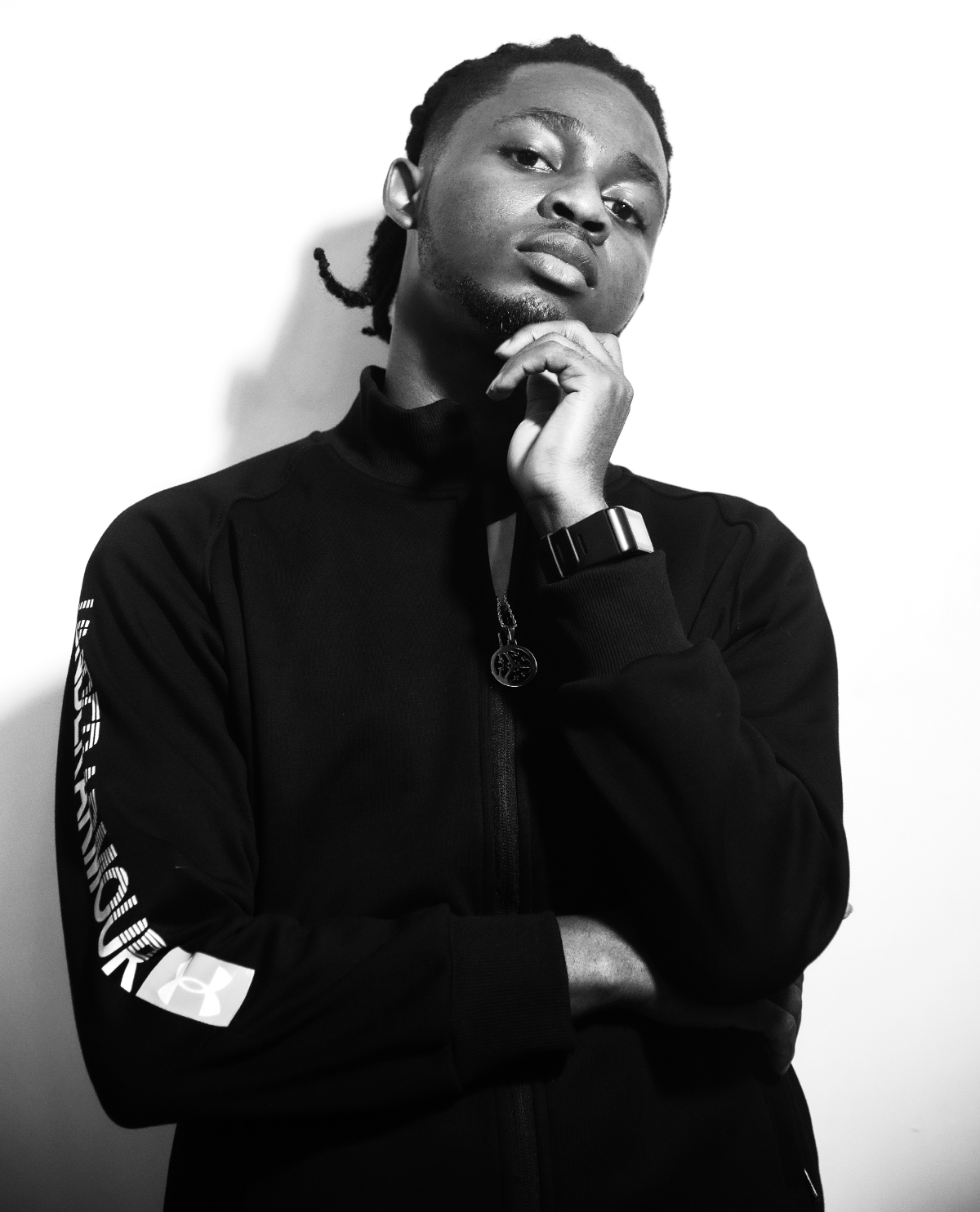 Other things that changed include the number of songs on the EP. Get Layd has 5 tracks but the first version had 7!

It was originally 7 but then all songs that I recorded for Child’s Play didn’t make it to the Record.

Wait – not even one?

Not even one of them!

Are we going to hear any of those in future projects?

Sometime in the future.

That sounds like #AlbumMode to me. If we talk about influences, you’ve said that you love Wande Coal, Wizkid, Burna Boy, Falz, Olamide, Niniola. Plus you inspire loads of people. Who’s got your attention right now?

Who am I feeling right now? I’m definitely feeling Zinoleesky…and then Ruger. I like him. I like his sound. I like how he does his thing pen wise.

Is it true that you like to record alone in the studio? Is it dark? Is it light? What’s the ambience?

Yeah, it’s dark. As a matter of fact, I didn’t sleep until 6am last night and I was all alone. That’s how I vibe – to be by myself and make sure it’s dark.

You’re a singer, songwriter and producer; an all-round multi-talented guy. Do you prefer to lay vocals on tracks you’ve produced or do you prefer working with other people?

In the last year, you’ve given us collabs: Justin Bieber, Wizkid, Olamide, Gyakie, Ajebo Hustlers… Oh, how can I forget 6lack? How did that collab come about?

6lack, my brother! I’ve been talking to him for a while. Not like deep conversations… It was just “I feel your sound” kinda thing. It got to that point that we just had to make a record and he hit me up. I was so excited! I sent the beat and all that and boom! That was it.

Let’s go back to the beginning. We’ve spoken a lot about Omah Lay! Let’s talk about Stanley.

Hmmm…That’s actually my name. It’s been a while since someone called me that.

Don’t worry, you’re not in trouble. Tell me about growing up in a marine base as a teenager.

It was an experience. It was really sweet because life at the Marine Base at that time was really wild. Marine Base is like the typical Port Harcourt (PH). When you hear about PH: the violence, the girls…everything you hear, the Marine Base is where it all happens. It’s number one! It was fun growing up there. I think the environment actually inspired my music. It’s been a little while since I’ve been there to meet my guys but for this whole album ting, they’re gonna come stay with me for a bit so I can get my Marine Base vibes back and those slangs and stuff.

When we talk about PH, obviously we speak about Burna Boy, Timaya, Duncan Mighty and now we have you! What’s the one message you have for the people back at home?

There’s hope! That’s one thing I know for sure. Port Harcourt to the world. Afrobeats to the world. Duncan Mighty did it, Burna Boy did it, Timaya did it, I did it, Ajebo Hustlers are doing it, a lot more other people will do it, and you can do it too! 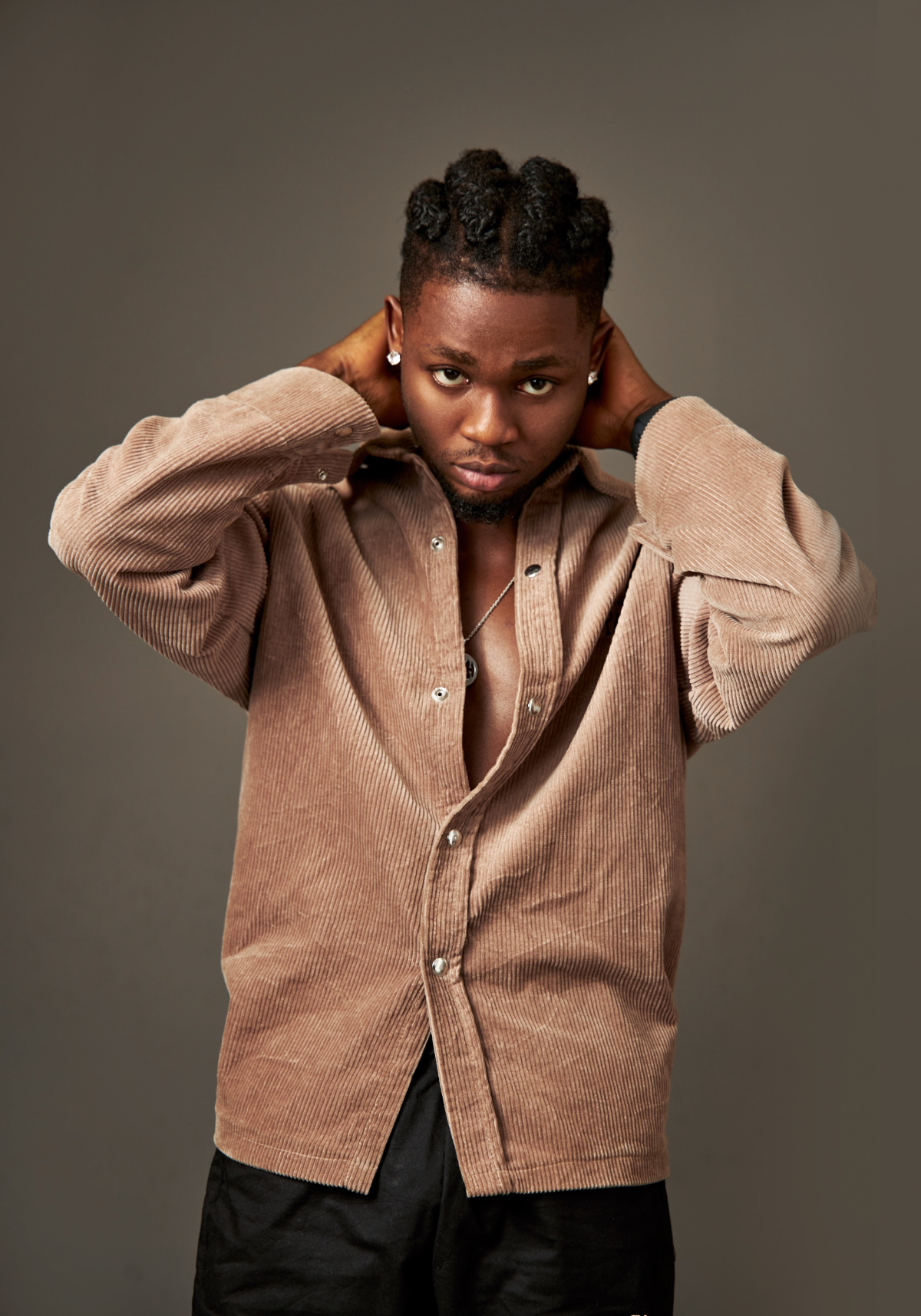 Talking about hope, we saw you jump on Instagram Live with Saweetie giving hope to a generation by enlightening people about the #EndSARS and the Lekki Toll Gate Massacre. What are your thoughts about what’s happening right now in Nigeria?

So far, I think there’s been progress; somehow it feels like the harassment has been less. From my own end, I’ve been seeing less police harassment but still, I stand for what I stand for. End police brutality in Nigeria and that’s it.

Let’s pick up the mood, two years ago this month you decided to move to Lagos; the entertainment hub of Nigeria. Take us back to July 2019, what was that move like?

Omo! At first when I was leaving PH, that was my first time actually flying. I felt like I was blown already because I flying. When I actually went to Lagos, a lot of things changed. I learnt a lot. I recorded a whole lot and I made Get Layd. Fast forward to this time, I’m recording my new album.

We can’t talk and not touch on winning the Headies, congratulations! What caused you to bring the other nominees, Oxlade and Bella Shmurda, up on stage when you receiving the award?

It was just because of love. I love my brother’s man! Me winning doesn’t mean that I’m the best. They all deserved it. It was just my turn to take it and that’s all! I love Bella Shmurda, you’ll probably see him coming through my door in a few minutes. He’s my guy! He’s my brother man, and Oxlade too! Tems is my baby.

If we want to know what you have for breakfast or your favourite selfie angle, where can we find you online?

Thank you so much for joining us at Pause Magazine.

Thank you for having me Gracey! 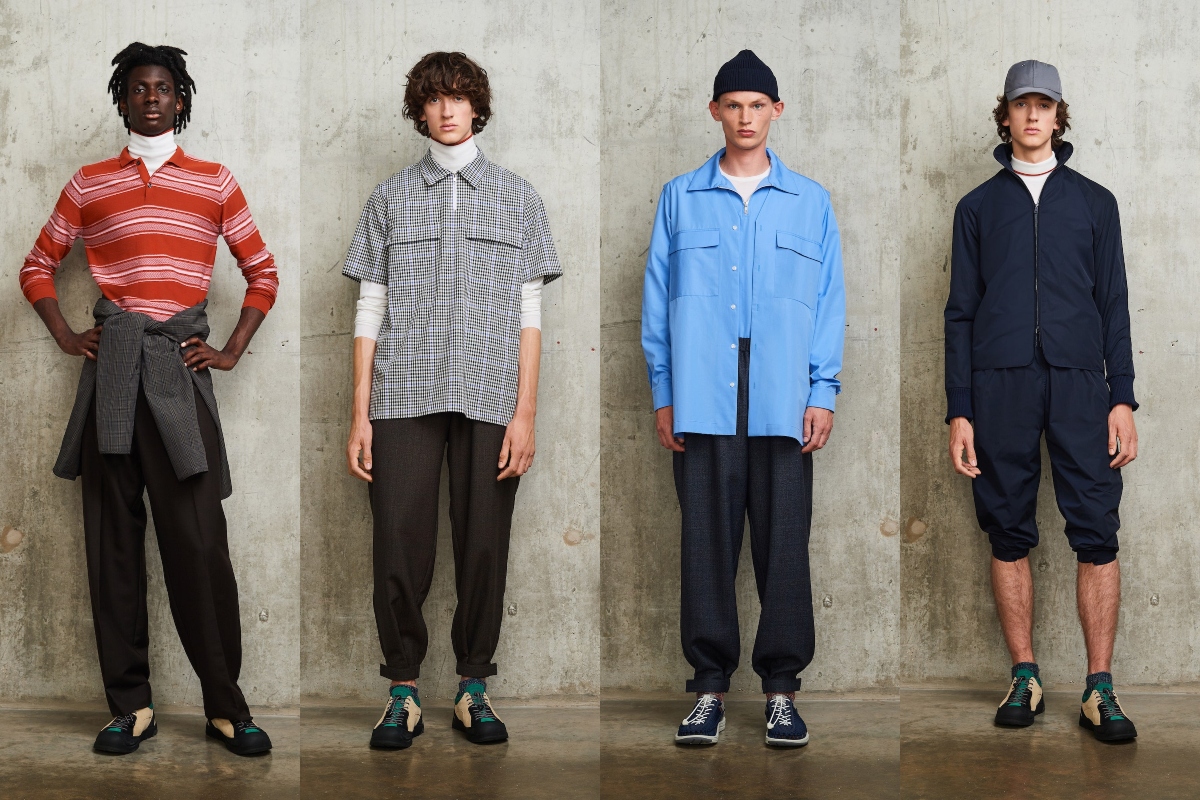