Here’s our round-up of the latest celebrity fashion. 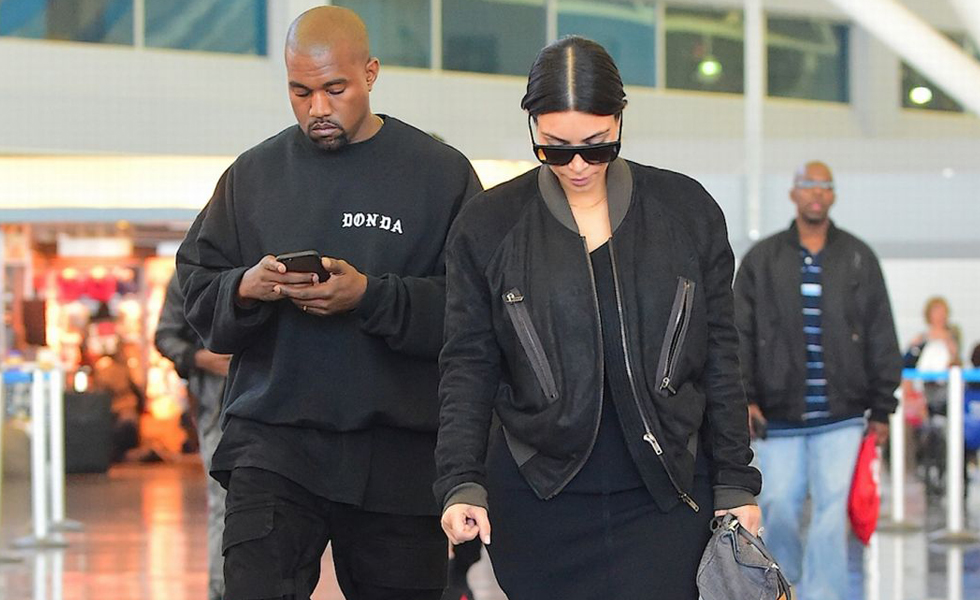 By now, we all know that Lewis Hamilton is always spotted in the most clean and stylish garments – this time at LAX airport in Los Angeles, he was spotted in a Givenchy black leather and suede biker jacket. In 2013, Givenchy released a new iteration of the classic leather jacket, featuring tonal quilted ribbed suede panels at the shoulders and cinch-belts at the waist. If you’re lucky, you can still find this ribbed leather jacket at selected Givenchy stockists for $4,190. The other option is this similar biker jacket from ASOS. 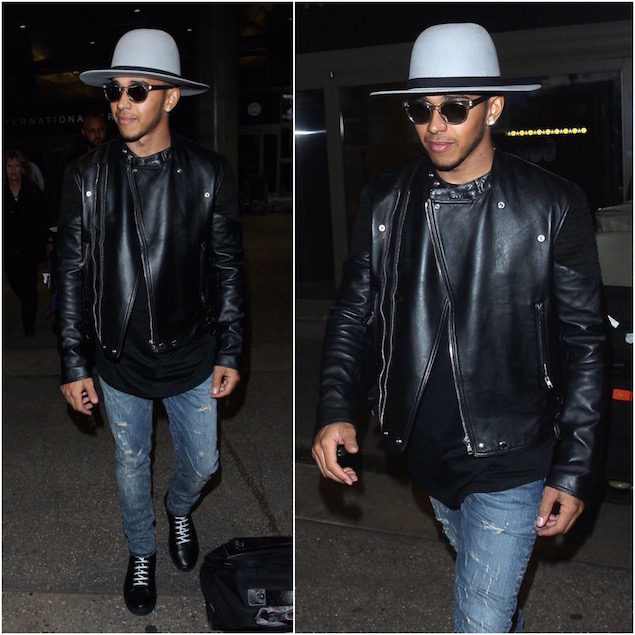 On the other side of the world, Sam Smith was spotted in a laid back outfit that suits the Australian mood. He was wearing a khaki diamond quilted jacket, featuring zip and press-stud closure, from Burberry, $595. To complete the look, he matched the jacket with a simple stripped t-shirt, Saint Laurent, $570 and a pair of Prada slip-on sneakers, $590. To get an affordable look, go for a G-Star jacket, and wear it with a t-shirt from Abercrombie & Fitch and a pair of Nike slip-on sneakers. 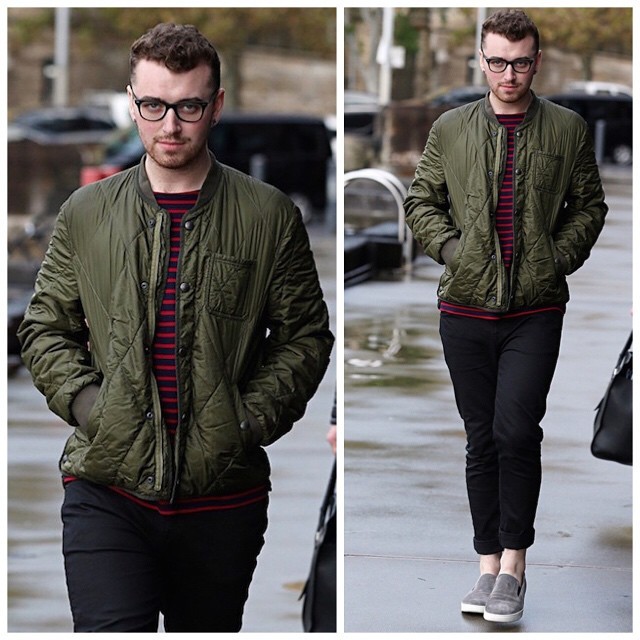 Another day has come and gone and Justin Bieber rocks a new hairstyle and style. After all the anticipation, he finally unveiled his new hairstyle over Instagram – trimmed sides and and a long comb-over.

During his visit in Italy, filming a scence for the upcoming movie Zoolander 2, Justin was spotted in a grey long sleeved sweatshirt from Neil Barrett, featuring a drawstring hood, side zip and a black and white color blocked design.

Last week, he flew back to LA and was seen in black relaxed-fit Marcelo Burlon County of Milan basketball shorts, his favorite Nick Fouquet fedora hat and a greyish marble loose t-shirt that can be found at River Island. 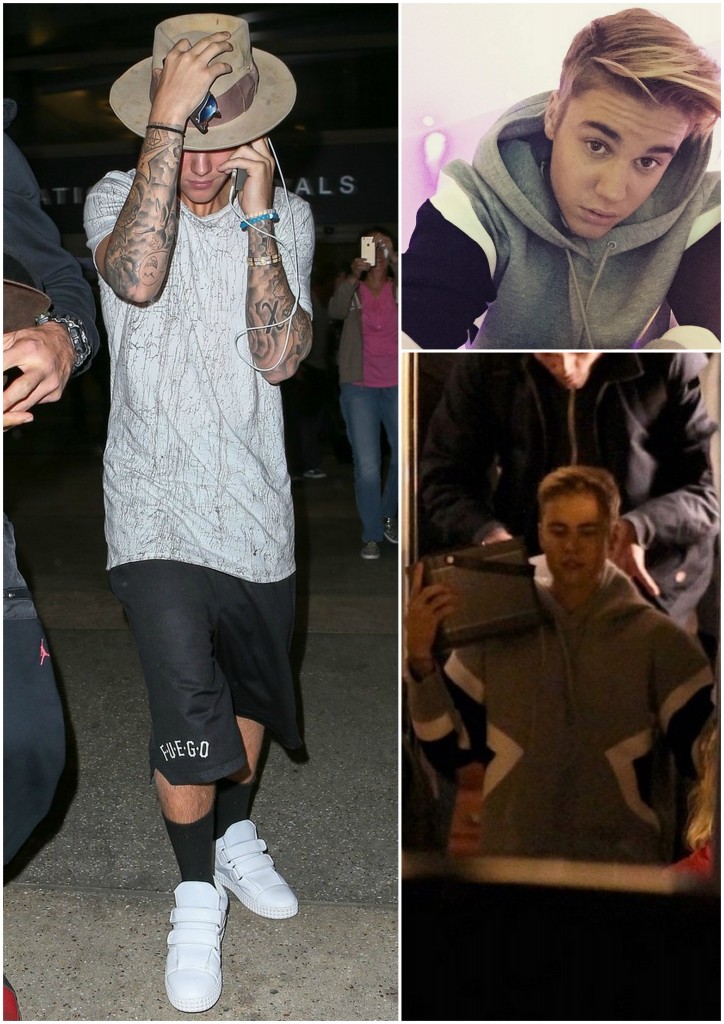 Justin Bieber is not the only one who’s litterally addicted to his fedora hat, Will Smith was also seen in a fedora hat and a pair of Giuseppe Zanotti sneakers, during the filming for the upcoming movie Suicide Squad, and David Beckham who recently joined Instagram rocks the fedora hat as well. Obviously, a fedora hat is a must this season – a piece that never go out of style and can be found pretty much in every store from Topman to Nick Fouquet. 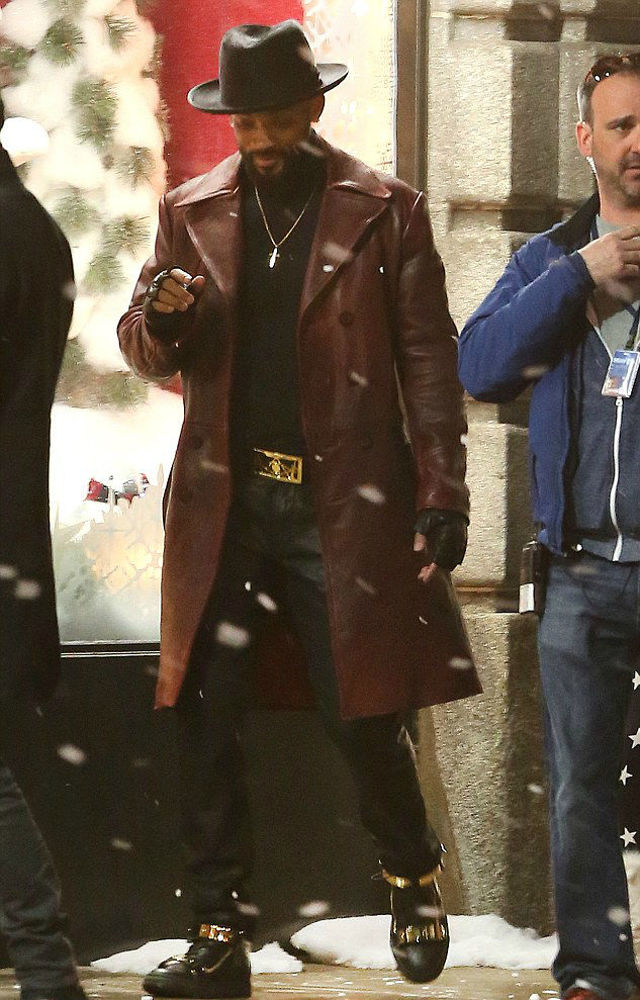 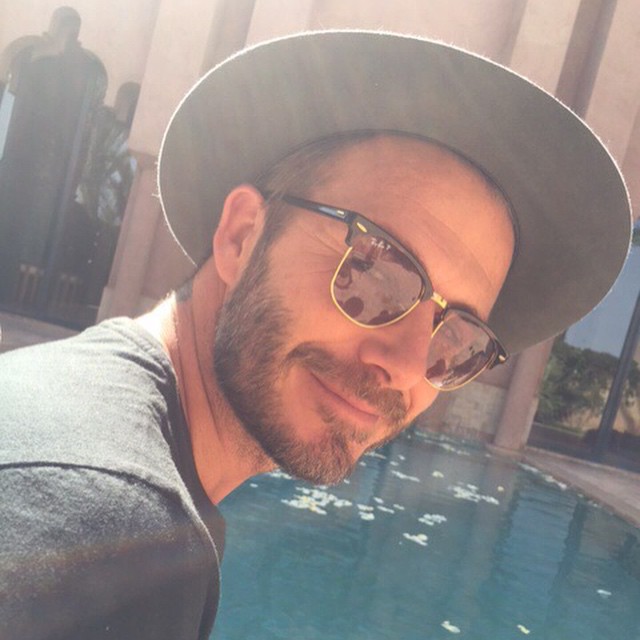 The power couples Kanye & Kim West and Robert Pattinson & FKA Twigs are Always seen in stylish – sometimes even matching outfits. The Wests Went for an all-black, military inspired look while FKA Twigs and Pattinson went for a more relaxed yet very edgy look.

To get Robert Pattinson’s look, match a blue shirt with a navy blue Weekday bomber jacket, a pair of dark jeans and Nike Roshe Run FB sneakers. If you’re on a Kanye West mood, layer different black, loose pieces on top of each other and finish the look with a pair of Kanye West x Adidas boots. Get the look, shop this black Stussy long sleeve, black t-shirt, military trousers and light brown boots. 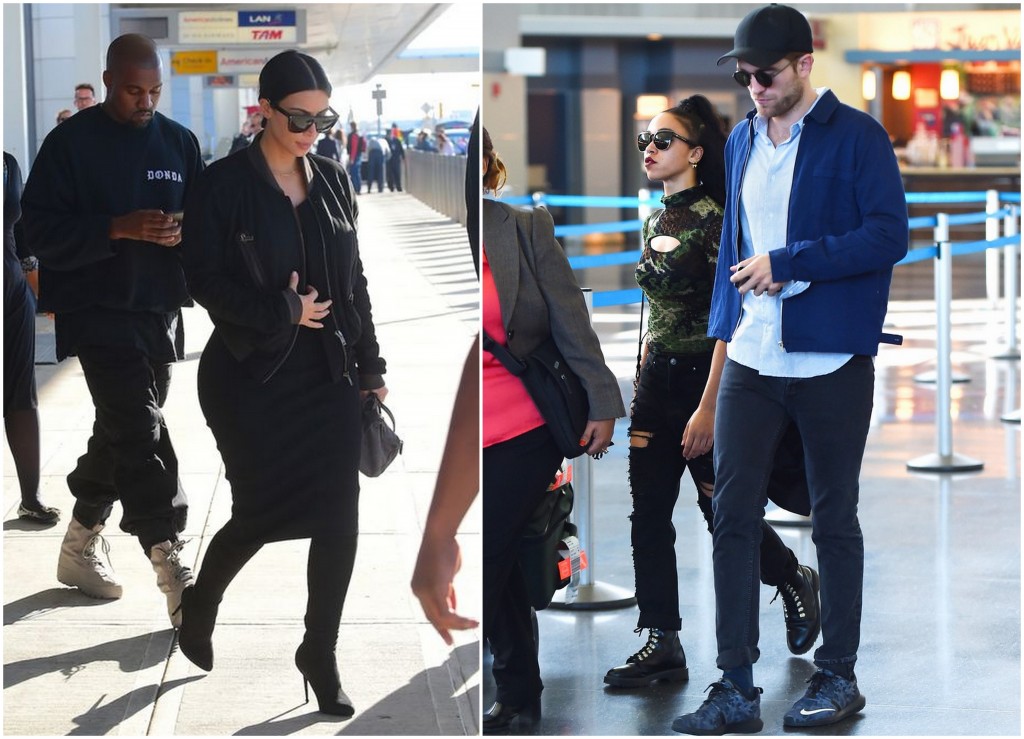 Which celebrity couple is killing it in terms of style? Vote below:

Our vote goes to Kanye West & Kim, we do love THIS look. 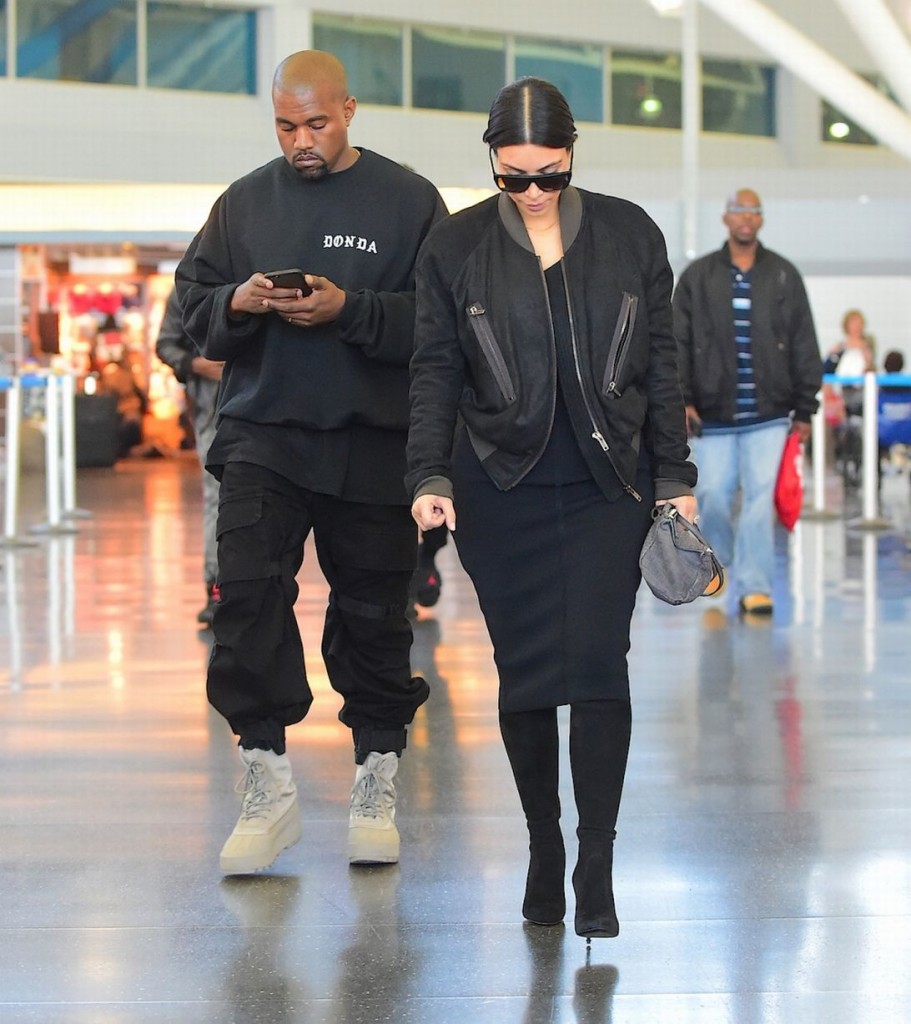 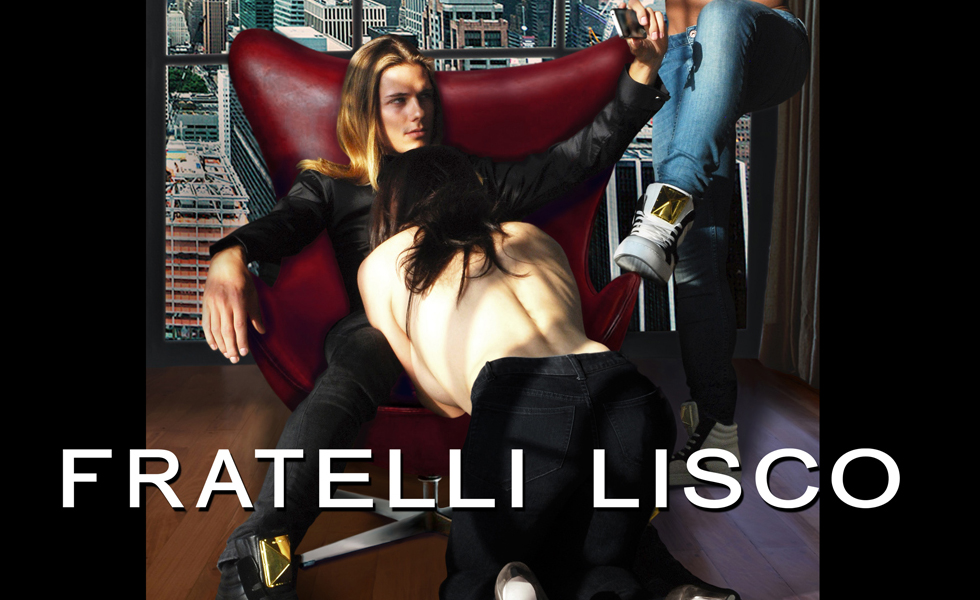