With all eyes flitting to Florence for Pitti Uomo’s arguably best lineup ever, LCM seems a distant memory. It came and went in a flash with the highs and lows as anticipated.

For some brands there’s the feeling that, in a bid to be the most eccentric, the most subversive, the aesthetic of madness is kinda becoming the norm. Inspirations are flailing between the past and the future and are ending up over-hybridised in many a case.

It was only a few years ago when the subtle collisions of opposing styles and references bolstered menswear into what we know today. Now, as is the case in so many creative pursuits, we‘re faced with a saturation. Too many conflicting and seemingly cherry-picked ideas are creating a stylistic language that is almost confusing.

On the other hand, some of our favourite collections emerged from the level of thought and cultural resonance and response that came about for SS17. Not surprisingly, topping this list is Wales Bonner who looked to the coronation of Haile Selassie in 1930. The to her style however the references did not solace themselves to the starting point.

A cropped leather jacket with embroidered spread collar (#coveting) was styled over a stark white waistcoat, long black socks and cropped black trousers. The array historic and contemporary and added to the list of designers reviving, in the most modern sense, the art of tailoring. Contemporary menswear today largely shies away from the cut and craft of suiting, with utility, hybrid referencing and streetwear-inspired fashions dominating but over the weekend, excitingly, a range of very fresh takes on the suit were approached. Where better than in London, the home of Jermyn Street and Savile Row?

Right on the other end of the aesthetic spectrum at the Fashion East presentation, Theseus Buck and Luke Brooks brought the fun and the bizarre to their (Rottingdean) Bazaar’. It was all about the sweats with anything from balloons to bras were badged on to the statement pieces.

After developing a signature look over past seasons, the incredible Craig Green brought something wholly different to the table this season without straying from the construction focus of his design. A flurry of Moorish pattern, layered flag-inspired fabrics and structural fabric cuts storms the runway with whimsy and power. 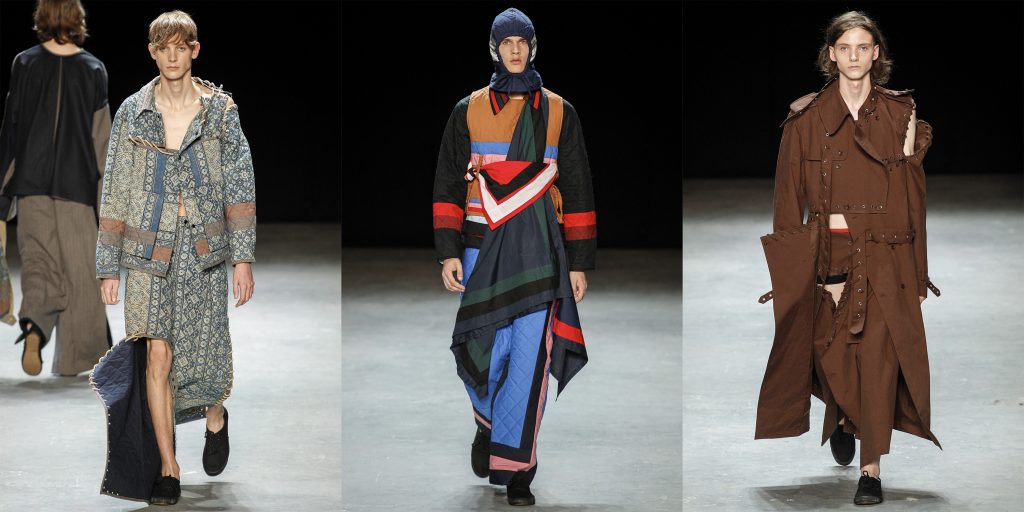 There was pure spectacle and theatre at Aitor Throup’s New Object Research display, which was hauntingly powerful with the ‘trans-seasonal’ collection modelled by ghostly life-size puppets. A serious return to the schedule.

Other faves bits include the hyper-elongated sweaters at J.W. Anderson, the embroidered palm trees at Topman Design and the raw-edged blazer from Public School.

Over in Florence, Gosha Rubchinskiy’s show yesterday was supplemented by a 17 minute black and white film. The Russian designer-photographer planted his troupe and vision of Soviet youth into a deserted tobacco factory in the Florentine fashion hub. The streetwear brands absorbed into the looks were fitted too their surroundings with Italian sportswear labels Fila, Kappa and Sergio Tacchini. The counterfeit ‘look’ was key. Rubchinskiy’s bare chested suiting and Levi’s cords and denim showed the real development of the collections and brand style while upping the ante for Pitti Uomo 90. 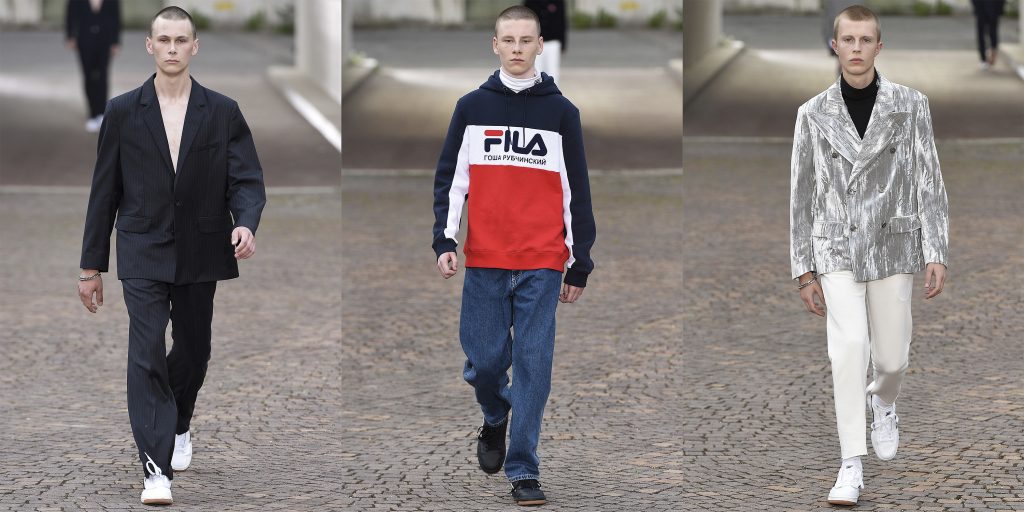