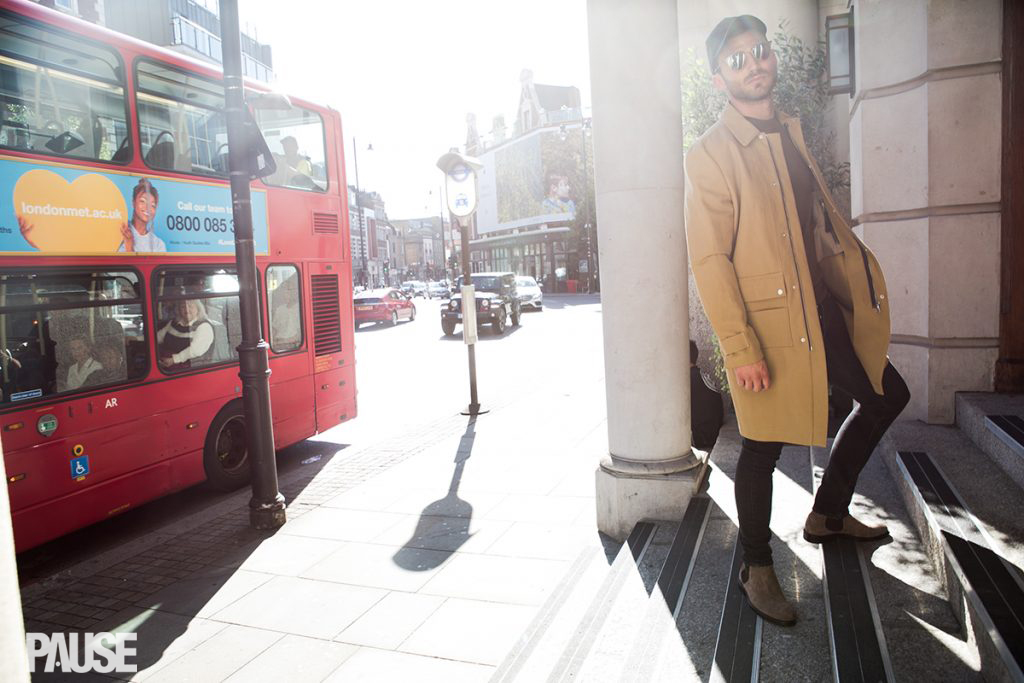 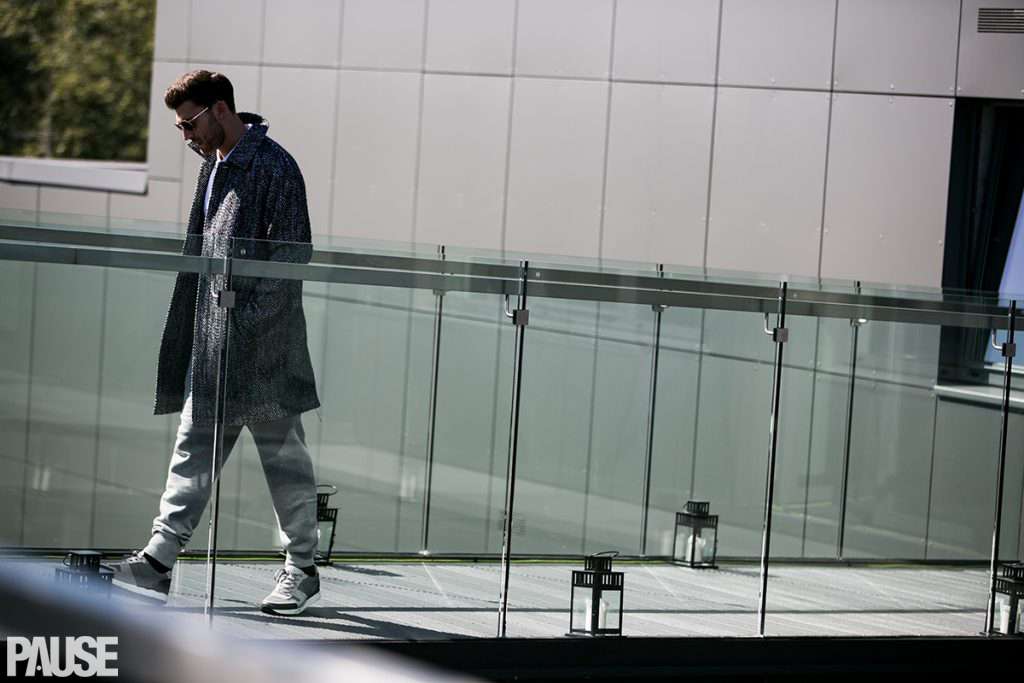 Let’s talk music.  So you’ve recently released your new track ‘Feel My Love’ which is quite a different direction to your previous work.  What made you decide to go for a sound that was a little more electronic?

Erm.. Yeah, I have obviously been writing songs on my guitar for so long and it’s all samey samey songs about love, feelings and that. There’s only so many songs you can go with on a guitar. So I got approached by the producers KNOXA, and they wanted me to write with one of their writers for a song. I went in and they were sound boys, we literally came up with it for about two hours, we got all the vocals down in about two hours, then went outside and just had a few drinks when it was done and dusted. They obviously tweaked it and did their magic with the melody and with what they do with the music. It just turned out so different to what I usually do, but I am so glad that I did it.

[Cause usually you’re more an R&B, ballad type of guy] Well R&B, ballad’y, acoustic’y kind of guy. This is like something you would listen to at a pool party in Ibiza with a drink in your hand and that’s what I wanted to do. Especially doing club appearances and stuff like that, it’s nice to drop a song where people can just dance to it and get in the mix.

Do you think it’s important for artists to mix up and adapt their sound to move with the times?

The times have changed that much that I think you have to just go with the times or you’re just gonna be left back, d’ya know what I mean? I think it is important to keep growing and changing, and keep doing new things really. I’m always going to try and do new stuff. So if someone said they’ve got a new opera song they want me to do, I’d go and do it just to see what it sounds like! I love all music that much, I think it would be nice to do a bit of everything!

What’s the reception been like from fans since the tracks release? Are they liking your new direction?

Yeah, everyone seems to love it. Everyone is saying it’s different to what they’re used to from me. Like, they’re probably used to light a few candles and sit in a dark room and listen to it by themselves and like think about loved ones. But this one they can have a dance to and have a party.  All the reviews on it have been incredible, so for me, perfect. 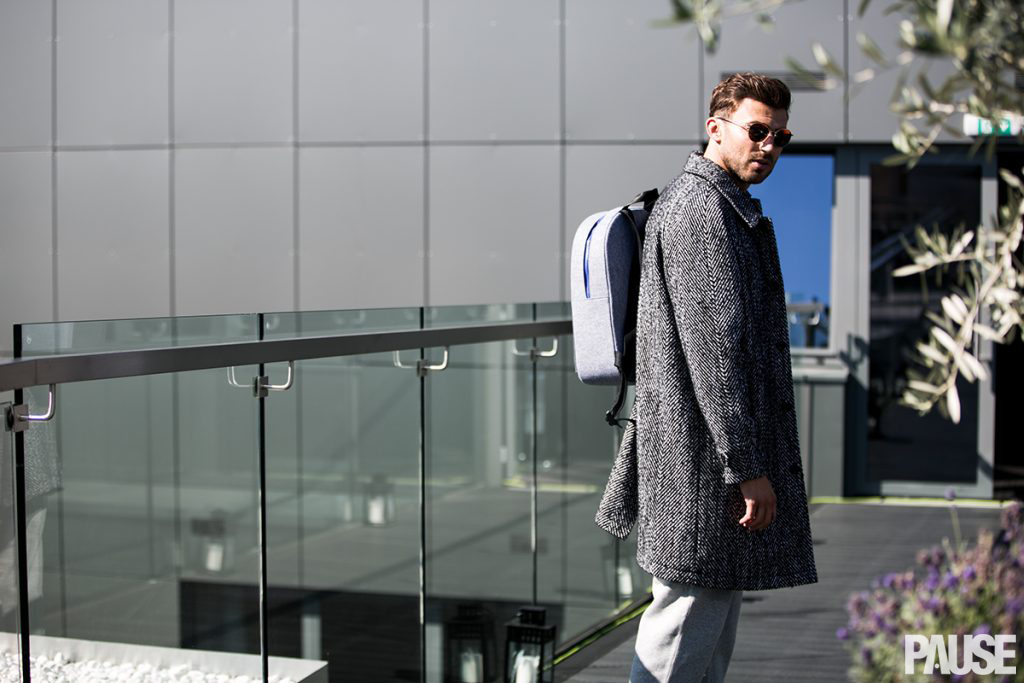 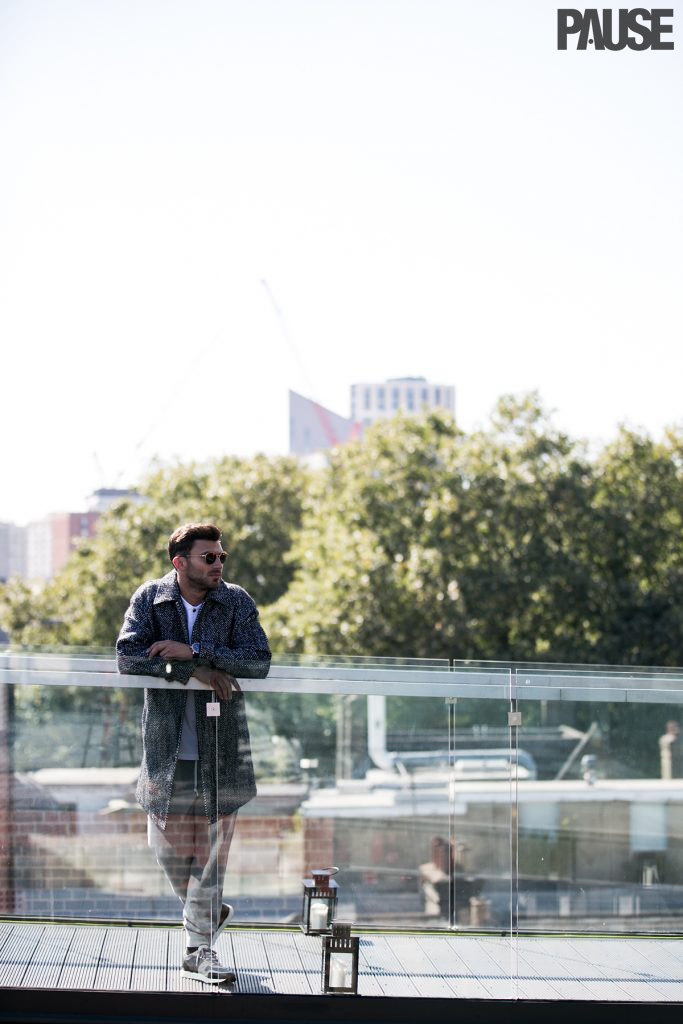 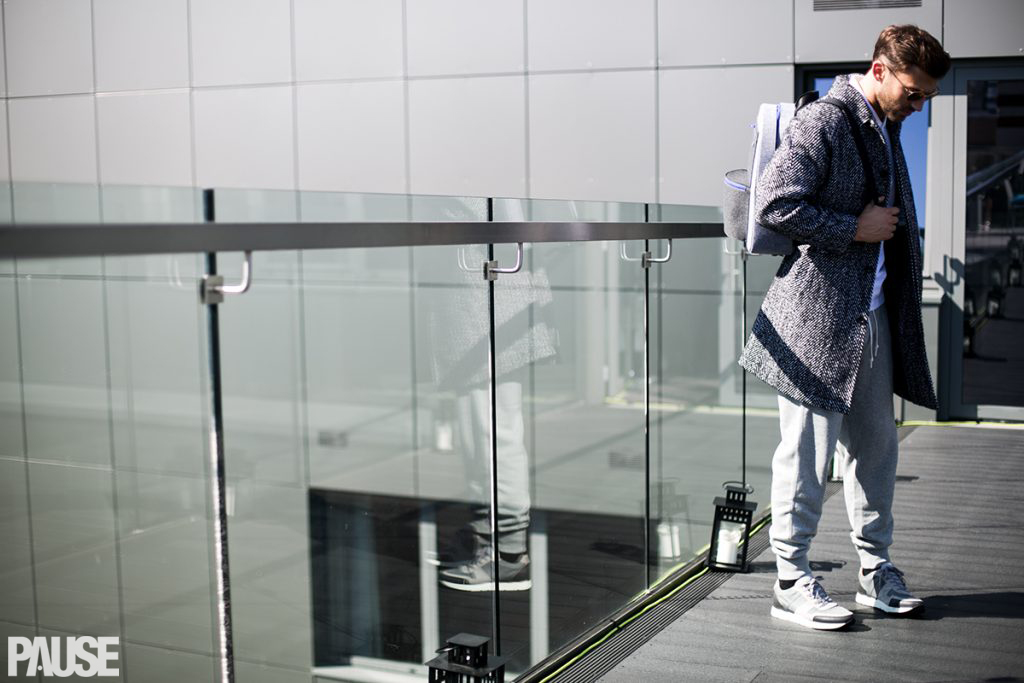 Not that you’ve ever been without it, but how do you feel about social media and the relationship it creates between an artist and their fans?

Mate I love it, like I love the fact that people support me and I would never wanna change the person I am and get big headed or get up myself and I think they know that and I’ve got a good group of mates around me and family. And mate, if I changed, they’d probably just give me a backhander and tell me stop being a prick – like you’re not that person. People know me for me, so why change that? The fact people follow me on social media, I love social media.. I’m a Twitter and Instagram addict. (Snapping everyday?) Mate all day. I love it. Like I said, people are on there, I like talking to them and I always try and communicate with people that give me the time of day. It’s great.

Mate, I ain’t even upgraded my Instagram. Get away with me, with trying to do the stories – it’s Snapchat!

Anyway, we know you’re big into fitness – so, what’s your regime?

I try and do 5 times a week in the gym, but it’s all playing football and just whatever I can.. It is about being a bit vein. Like I ain’t gonna lie, I wanna look good, especially in the industry we’re in. If you put on a few pounds on TV, people are gonna straight away pick on ya, which they shouldn’t do but they do. But for me, it’s more about staying fit, so I play footy and so I don’t get sweat when I’m going up the stairs.

That hour out the day when I go to the gym gives me time to think, it gets rid of a lot of tension. If I’m stressed out, I’ll go beat the shit out of a punch bag, and it makes me feel better. 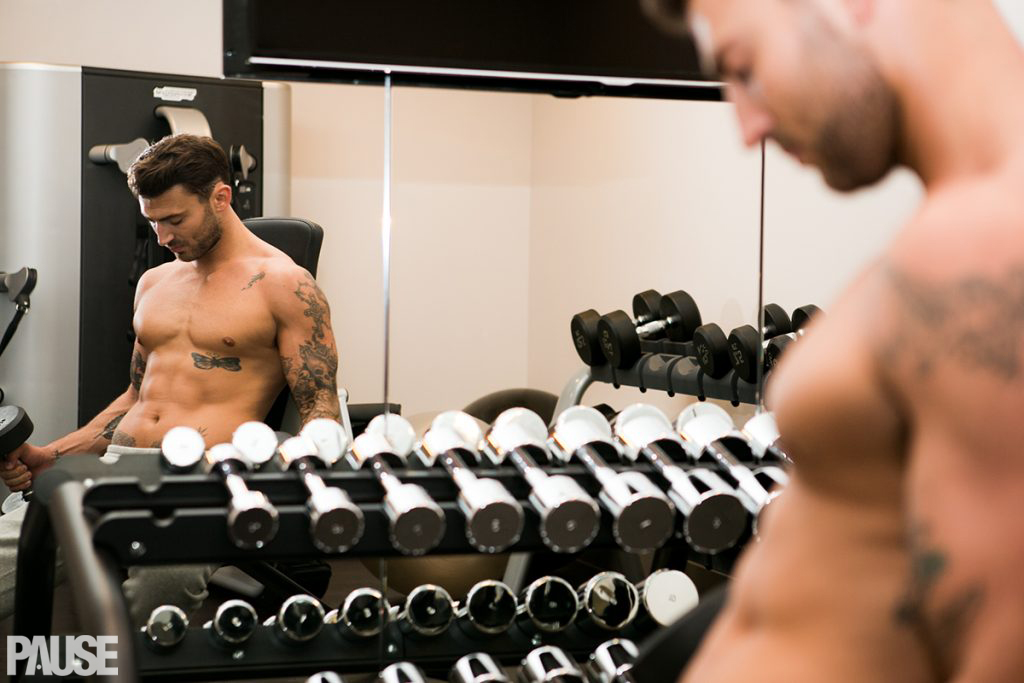 In terms of working out, for someone that has only a little bit of time but wants maximum results, which one exercise would you recommend?

Just try and fit in 20 minutes. 20 minutes is all you need; 20 minutes a day. Even if you’re a beginner and you’re just walking for 20 minutes, it’s better than nothing. Like that 20 minutes, is the 20 minutes you would’ve been sat doing nothing and just build up. I only train for an hour a day.

Is it short bursts?

I do 20 minutes of HIT training, which is like 30 seconds intense and 30 seconds rest. If you’re doing that for 20 minutes a day, then you’re going to be laughing.

I think where most people fall down is keeping the motivation, obviously in your position it’s quite important but what do you tell yourself in order to get you down to the gym every morning?

Staying fit in general, is because I play sports, I play a lot of football so I need to be fit – it’s a part of my life. Growing up, my Dad was into fitness and my big brother is a jujitsu coach. So for me, I always wanna stay fit. But again it’s nice to put some clothes on and feel good. Or be on holiday and be around the pool and feel good about yourself. It’s a bit of both; it’s about feeling good and being mentally good and just knowing how you like yourself to be. D’ you know what I mean?

In terms of fashion, how would you describe your style and do you think fitness takes a toll on how you dress?

No, cause gym clobber is really shit. Like, I just pull on anything – like I was telling you earlier, I had leopard skin leggings on the other day. Just because I’m useless at doing my washing, my gym stuff is in the corner stinking the room out so then by the end of the week I’ve got no gym stuff to wear. So I wear a plain black Zara t-shirt and some joggers and I’ll go train.  So I wouldn’t say my style is that kind of style. I’m into the Chelsea Boots, Skinny Jeans, Leather Jackets, Denim Jackets, kind of look.

In terms of physique, does that impact how you dress?

I like having tighter shirts, but baggier t-shirts – I’m like that. I think if you got too big in the gym, if you were like The Rock, you wouldn’t look good in a denim jacket. It’s about keeping your body the way you wanna dress as well.  I’ve got quite big legs from football, so I wouldn’t wanna train my legs overly cause if I had massive legs skinny jeans would look ridiculous! 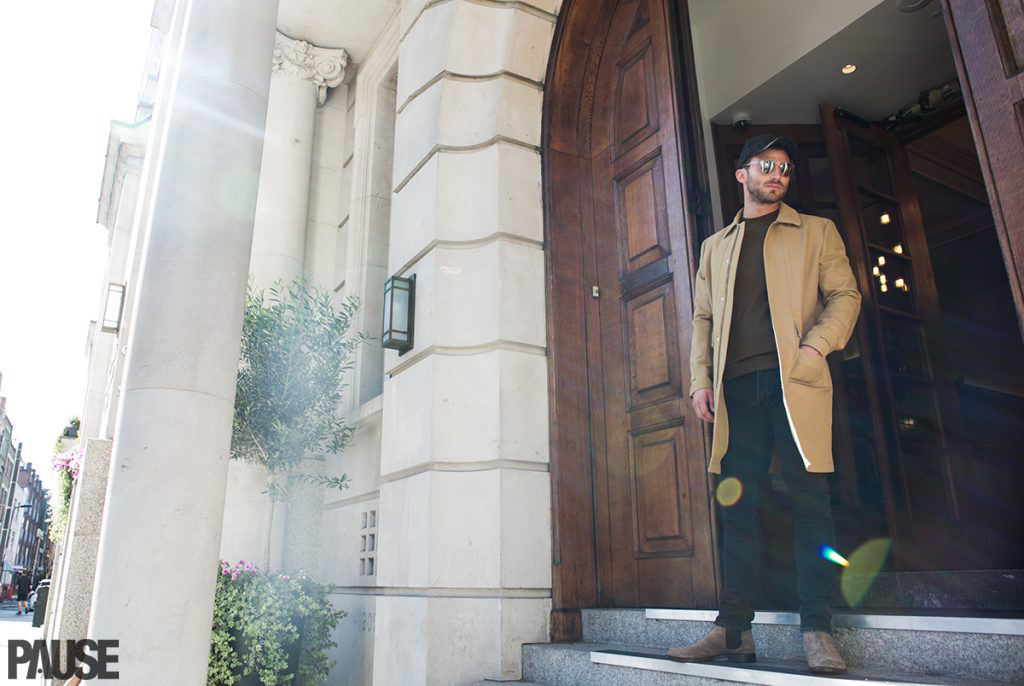 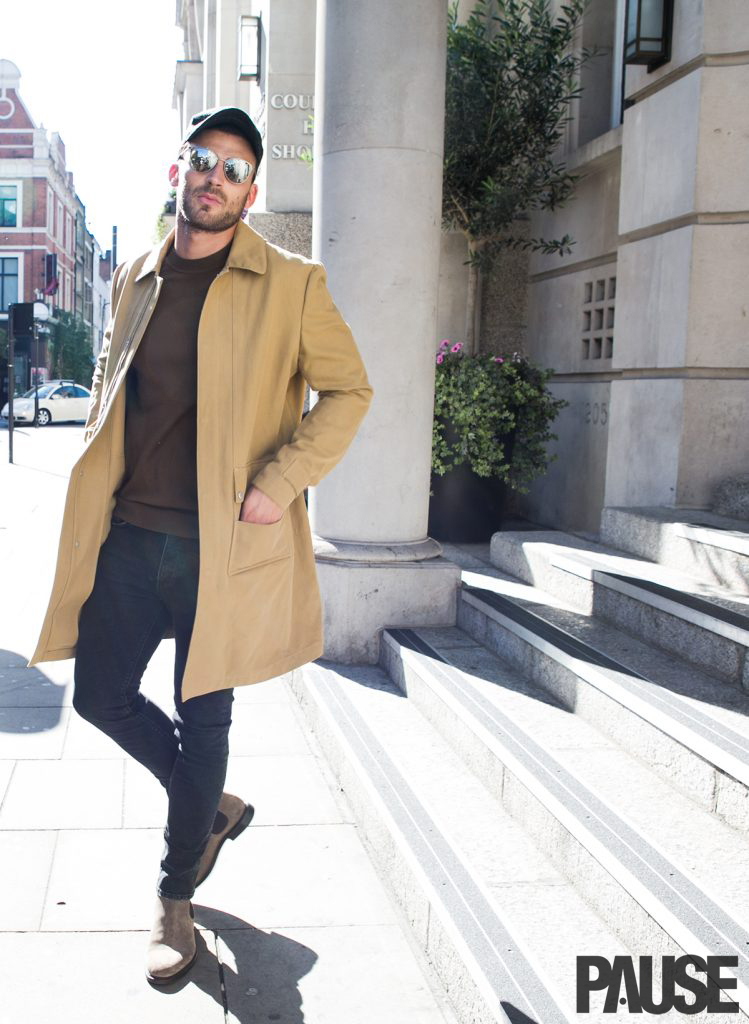 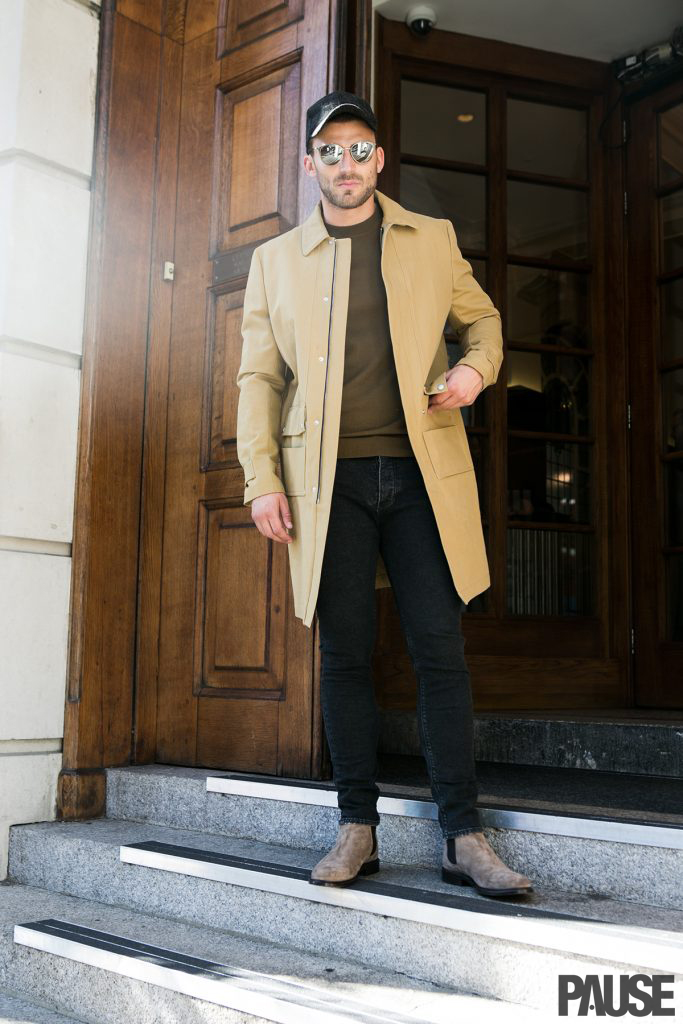 How about your favourite brands or designers?

I like a lot of high street; Topman, Zara, River Island – stuff like that. I’ll buy some trainers; trainers are where I spend most of my money.  I love leather jackets, I love denim jackets. I’m quite plain. I wear a lot of black. Ripped jeans, plain black t-shirts, plain white t-shirts, bomber jackets.

Three pieces from your wardrobe you couldn’t live without?

How about grooming, we know men tend to find a product and stick to it – what are your go-to grooming products?

I obviously brush my teeth, moisturize; bit of my Tom Ford moisturizer. I’m not even gonna lie, I’m not shy to some tinted moisturizer if I’m looking pale. A nice aftershave, Creed again by Tom Ford and yeah that’s about it. I’ve started putting this under eye stuff on, it’s supposed to get rid of your bags, it’s good you know (and it’s working).  That’s pretty much my routine, grooming wise.   I never wet shave, I just electric razor. That’s about it.

So you get up, wash your face?

Yeah, get up, wash my face.. When I’m in the shower, I never use wash or anything like that – just soap. It’s more moisturizer and feeling fresh after.

How about your hair, any grooming tips?

I’m quite particular about my hair, so I try not to put that much product on. The only time I put product on, is a shoot or TV. Usually, I just blowdry it and it’ll be flopping. I’m not too particular about my hair.  I use dry shampoo, because I have some grey hairs. It’s a brown shampoo, so I spray it on and it makes my hair look browner. And then wax, and spray. I was using that dust, like the white stuff, but it makes my hair feel so bad, so I just scrap that.

Finally, you’re obviously very busy at the moment with your fitness and music, but you also spend a lot of time giving back and raising money for the charity. So much so that you’ve recently been named an ambassador for the Teenage Cancer Trust – how does this feel?

For me it’s amazing. You know, I lost my Dad to cancer, my little brother to cancer so for me to be involved with such a big charity – it’s mint. Like we just did a sunburn campaign, so basically just about putting suntan lotion on, even in England. ‘Cause you can get skin cancer at any age.

You’ve been given a platform to do jobs you wanna do; presenting, modelling, football whatever you do, but you’ve got that platform so you should use it for good. As long as I can do that, I’m happy! 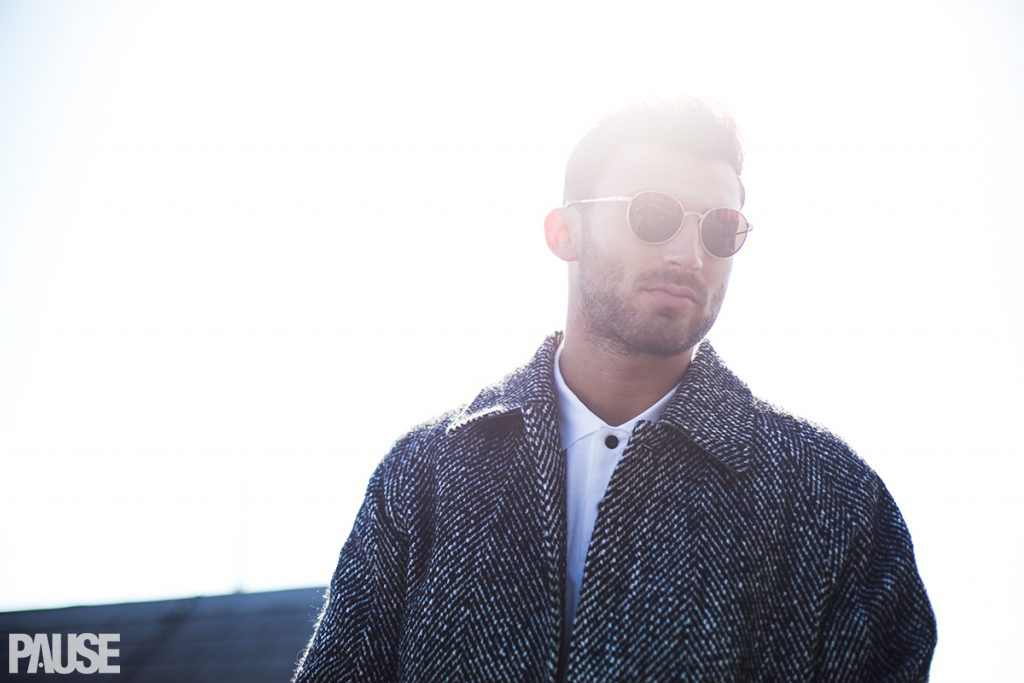 Jake’s single ‘Feel My Love’ is out now. You can catch him on tour around the UK in September and October. For more information: www.jakequickendenofficial.com
Follow Jake Quickenden:
Snapchat – @jakeyq
Instagram – @jakequickenden14
Twitter – @jakequickenden
Courthouse Hotel Shoreditch – 335-337 Old Street, London EC1V 9LL
This £40 million renovation project has seen the nick that housed the East End’s most notorious felons morph into a haven of spacious rooms and suites; restaurants; bars; bowling alley; spa and luxurious cinema.  Courthouse Hotel Shoreditch has used its colourful past – the Grade II listed building served as the Old Street Magistrates’ Court and Police Station from 1903 until 1996 – to create a truly one-of-a-kind backdrop.  Impressive period features have been retained and restored before being complemented by equally arresting contemporary additions. 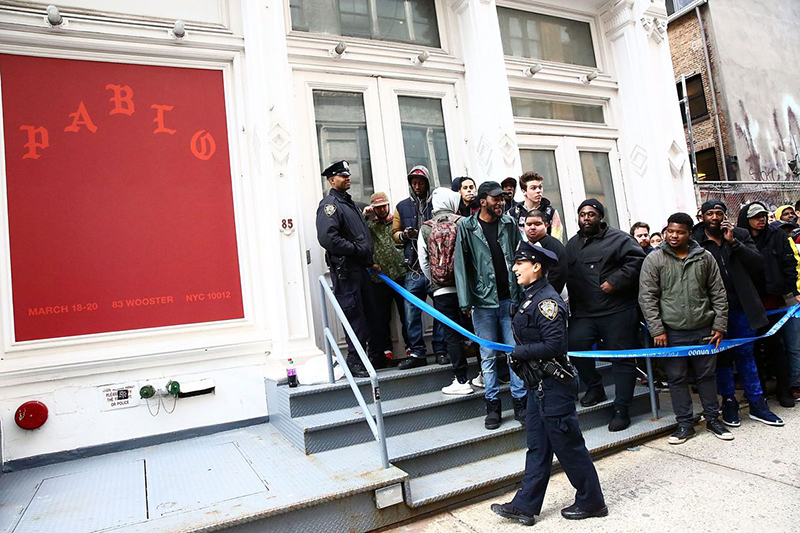