A drop for the superhuman.

Inspired by NBA stars, Ricardo Tisci’s latest collaboration with NikeLab has been designed for a fictional team named, the Victorious Minotaurs. The drop consists of a range of footwear and sportswear, with pieces for both men and women, pushing the boundaries of luxury fashion once again.

Returning to the ever successful Air Force 1, Tisci has given the model a makeover which will be available in blue, white and red colour-ways, which all include the new NBA inspired NikeLab x RT logo.

Tisci plays with a series of graphics and logos for the Minotaurs that allow him to present the collection as a sort of off-court uniform. Combining a series of icons from sportswear, including the Oxford shirt, track pant, and varsity jacket, Tisci forms a collection of four pieces for men, three for women and a series of accessories.

The collection will be available in North America starting October 12, before seeing a release in Paris on October 20, and ultimately getting a worldwide release on October 21. 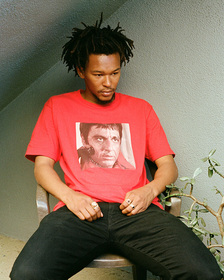